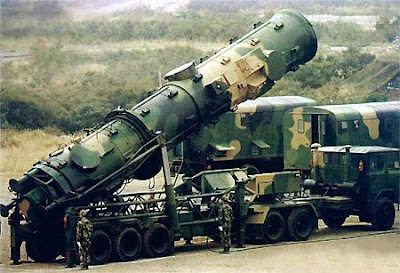 With tensions already rising due to the Chinese navy becoming more aggressive in asserting its territorial claims in the South China Sea, the U.S. Navy seems to have yet another reason to be deeply concerned.

After years of conjecture, details have begun to emerge of a "kill weapon" developed by the Chinese to target and destroy U.S. aircraft carriers.

First posted on a Chinese blog viewed as credible by military analysts and then translated by the naval affairs blog Information Dissemination, a recent report provides a description of an anti-ship ballistic missile (ASBM) that can strike carriers and other U.S. vessels at a range of 2000km.

The DongFeng 21 (NATO code name: CSS-5) is a two-stage, solid-propellant, single-warhead medium-range ballistic missile (MRBM) system developed by China Changfeng Mechanics and Electronics Technology Academy (also known as 2nd Space Academy). The missile design is based on the two-stage JuLang 1 submarine-launched ballistic missile (SLBM). The DongFeng 21 is capable of delivering a 500kT nuclear warhead over a distance of 1,800km. Some DongFeng 21 missiles are reportedly armed with a conventional warhead. The improved DongFeng 21A with extended range was reportedly introduced in 1996. China has also developed the Kaituozhe 1 (KT-1) space launch vehicle based on the DongFeng 21 design.

The range of the modified Dong Feng 21 missile is significant in that it covers the areas that are likely hot zones for future confrontations between U.S. and Chinese surface forces.

The size of the missile enables it to carry a warhead big enough to inflict significant damage on a large vessel, providing the Chinese the capability of destroying a U.S. supercarrier in one strike.

Well we already had a problem with the air/sea fired KSH-55 Sunburn which flew wavetop then hit at Mach 2+ giving our point defense weapon 2.5 seconds for a hit, which coincidentally was less than the time required to sense, target and fire, by the Phalanx. The Sunburn is fielded by Russia, China and we believe, Iran. Sweet, right?

Our response was to mount a high powered SeaRam system....One has to do some digging to find out how effective the system is. Raytheon isn't really saying much about it's performance, but I've managed to dig up some info.
"In 10 scenarios, real Anti-Ship Missiles and supersonic Vandal target missiles (Mach 2.5) were intercepted and destroyed under realistic conditions. RAM Block 1 achieved first-shot kills on every target in its presented scenarios, including sea-skimming, diving and highly maneuvering profiles in both single and stream attacks."
"With these test firings RAM demonstrated its unparalleled success against today's most challenging threats. Cumulatively to date more than 180 missiles have been fired against anti-ship missiles and other targets, achieving a success rate over 95%"
The SeaRAM is a drop in replacement for the Phalanx system. The RAM missle itself is a mach 2, second generation derivative of the Sidewinder and Stinger missles. It features BOTH infrared and radar based target tracking, allowing for use against future low radar cross section (stealthy) anti-ship missles. The effective range of the RAM missile is 11 miles. The CIWS part of the SeaRAM can track multiple targets and fire multiple missles at a single target. Each SeaRAM platform holds 11 RAM missiles.OKAY?

This threat is not going to be much faster at interception ranges, should be defensible by Aegis at longer ranges, and as a ballistic missile, even maneuverable and fired in a depressed trajectory won't be nearly as agile as the Sunburn. If the Aegis cannot defend at longer ranges than point defense, we have a much larger problem than carriers, and it's time for, and no excuses ..SPACE BASED DEFENSE

The Information and Dissemination blog puts it this way:
I think that in times of war, they would launch many micro-EO satellites that have short duration to increase reconnaissance in the area approaching Taiwan. Similar to US, they would have HALE UAVs to do advanced scouting in front of the war zone. The OTH radar will give the base initial idea of incoming fleet. This information would be combined with data of the recon satellites to provide a more precise and more accurate targeting data. The missile would be launched to the estimated position based on initial position + velocity, but this would obviously be off. Although, I think the movement of the carrier group will not be overwhelming. If the target is 2000 km away and the missile is traveling at mach 10 (343 * 3.6 * 10 = 10,000+ km/h) , it would get there in less than 12 minutes. During that time, if the fleet moves at 30 knots, it would move at most 6 knots or around 11 km from the original location. Still, if we add this to the initial precision problems of OTH radar + EO satellite, this could still cause the fleet to be outside the scanning area of the ASBM. In the cruising process, the missile would have to continuously communicate with the base through those new Data relay satellites (like TianLian-1 that they launched recently) to get more improve the precision. The ASBM will also likely veer off the path at this time, so it would need communication with Beidou-2 constellation in order to keep it on track. When it gets close to the target, the blog talked about 3 phases in its attack: high altitude guidance, high altitude gliding and low altitude guidance. I'm really not sure how accurate is the blog's description of the process. Its general theme is slowing down the speed of the missile as it gets closer to the target to maybe give the seeker more time to lock on to target and make unpredictable movements to penetrate defense.

You should work for the DoD. Your understanding of advanced weapons systems, foreign military tactics, percieved enemy strategies, and potential ways to counter all of the above is impeccable.

BTW fellow infidels:
I'm sorry for the down-time. I recently returned from a vacation to Europe.

Well after reading this article, I feel so much better that Obama has promised to end research in "unproven missile systems" (the stupid fool).

I have to dig out the DVD of RED DAWN

Total,
Did you enjoy your vacation? Which countries did you visit? What did you notice?