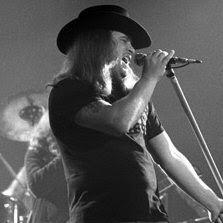 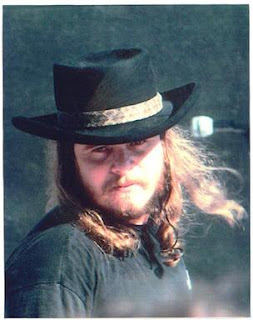 imated the band the author, who had traveled with the band at some length, relates the story of when Ed King left Skynyrd and Ronnie Van Zant was interviewing Leslie West of Mountain fame to be the third guitarist. At some point Van Zant draws West out to ask the question "Why can't a Yankee play in a Southern Band?" The author states Ronnie flashed that gotcha grin and, drawing deep from 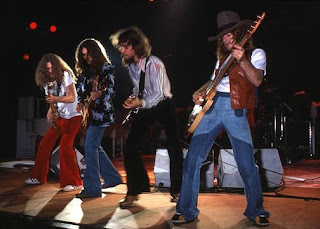 a bottle of Jack Daniels, says "Because only those who have had their feet in the fire the longest are the hottest". West pulls his Coke a bit closer.

Ronnie Van Zant was known to often perform barefooted. When asked about it he said "because I like to feel that stage burn." 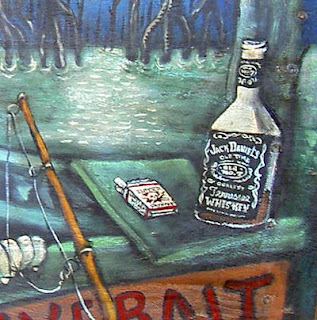 The man must have had callouses as thick and hard as horseshoes.
Lynyrd Skynyrd
at Knebworth 1976
T for Texas

"Bring all my mules out here"!!

They don't come any better than these folks......and to our generation (44 yrs) that night in Oct 1977 and the night SRV was killed right up here at Alpine Valley were the days the music died .

I and a few friends had just seen he, Eric Clapton and Robert Cray play on a night in August of 1990 and their helicopter crashed right into the side of the very foggy mountain they were just rocking on an hour earlier.

I myself am a lifetime guitar player, and my personal repertoire is loaded with the entire Skynyrd Catalog from top to bottom including first and foremost Freebird.

You name it I play it....Long Live Southern Rock

Chicago Ray you speak my language. A link for you, from Rolling Stone Dec 1, 1977. I'm 47 & remember both those days well when the news first broke.

I remember where I was when I heard SRV was gone. It is as vivid a memory as I have.

We were in West Texas, and he was going to play in Lubbock. We were going to go.

Thanks for the link

I tell you, I was 19 and going back to college back east at UVA the next week, and we always went to Alpine for shows and this one was awesome,

we were on the lawn, got all trashed, left the show which took 2 hrs to get beck home here in Chicago.

We got back and kept partying at around 4 am the tv comes on and said a helicopter crashed and ALL the headliners were dead and we freaked out , Clapton, SRV it as like Skynyrd all over,...Vaughn was supposed to drive back after his opening set but didn't.

Then an hour later they changed it to just Stevie Ray and the pilot. Freaky, being there the last time seeing him play, its burned in my head visually still today, and when I play his music guitarwise it's very eerie and sometimes teary....

Here's an eerie tidbit as well regarding that night from this pretty good bio even though it's the screwy wikipedia..

"Stevie Ray died exactly four years to the day after his father. In fact, less than a day before his death, his last concert in Alpine Valley, WI. Stevie had a premonition of death. He dreamt that he was at his own funeral and saw thousands of mourners (actually there were more than 3,000 people at his funeral). He felt "terrified, yet almost peaceful". SRV shared this story with his bandmates and some trusted crew members.