my wife, my immortal betrothed, sent me this:

The leader of the terrorists told them he'd grant each of them one last request before they were beheaded and dragged naked through the streets.

Katie Couric said, 'Well, I'm a Southerner, so I'd like one last plate of fried chicken.'

The leader nodded to an underling who left and returned with the chicken. Couric ate it all and said, 'Now I can die content.'

Charlie Gibson said, 'I'm living in ' New York, so I'd like to hear the song, The Moon and Me, one last time.'

The terrorist leader nodded to another terrorist who had studied the Western world and knew the music. He returned with some rag-tag musicians and played the song. Gibson was satisfied.

Brian Williams said, 'I'm a reporter to the end. I want to take out my tape recorder and describe the scene here and what's about to happen. Maybe, someday, someone will hear it and know that I was on the job till the end.'

The leader directed an aide to hand over the tape recorder and Williams dictated his comments.He then said, 'Now I can die happy.'

The leader turned and said, 'And now, Mr. U.S. Marine, what is your final wish?'

Kick me in the ass,' said the Marine.

'What?' asked the leader, 'Will you mock us in your last hour?

''No, I'm NOT kidding. I want you to kick me in the ass,' insisted the Marine.

So the leader shoved him into the yard and kicked him in the ass.

The Marine went sprawling, but rolled to his knees, pulled a 9 mm pistol from inside his cammies and shot the leader dead. In the resulting confusion, he emptied his sidearm on six terrorists, then with his knife he slashed the throat of one, and with an AK-47, which he took, sprayed the rest of the terrorists killing another 11. In a flash, all of them were either dead or fleeing for their lives.

As the Marine was untying Couric, Gibson, and Williams, they asked him, 'Why didn't you just shoot them all in the first place? Why did you ask him to kick you in the ass?

''What?' replied the Marine, 'and have you three assholes report that I was the aggressor'?

(silly wife of mine. everyone KNOWS the Marine would have pulled a .45 -- MR) 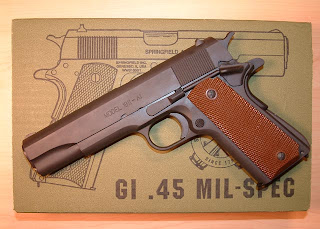 Wonderful weapon, isn't it Stogie? I have 2 1911's. Both Springfield Armory one full size Mil Spec and one Compact (current equivalent is the Champion model)