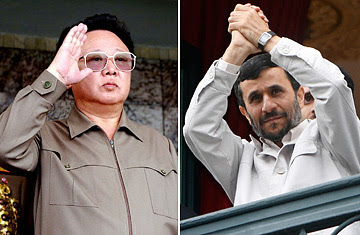 Having earlier noted the ballistic missile proliferation life cycle enjoyed by Iran and North Korea, even I am surprised by the AudacityTM of this development:

[Japanese newspaper] Sankei said in a separate dispatch from Washington that 15 personnel from the Iranian satellite and missile development company Shahid Hemmat Industrial Group are staying in North Korea at the invitation of the North Korean government.

Quoting unnamed intelligence sources in Washington it said are close to North Korean affairs, Sankei said the Iranians are likely to join North Korean preparations for the launch and also observe it. The report said North Korea sent missile experts to Iran when it launched a satellite in February.

North Korea is believed to have sold missiles to Iran, and Iran's Safir-Omid space launch vehicle owes much to the North's Taepodong missile.

Iranians in North Korea, North Koreans in Iran. It's as if WMD proliferation is something around which the North Koreans and Iranians revolve. An "axis," if you will. You know, another laughably archaic term, like "enemy combatants" and "Global War on Terror."

What would embolden the Iranians to now openly bask in the once-blistering proliferation spotlight? (hint)

So lets' compare the respective cycles each side of this crisis has demonstrated:

Meanwhile, the Obama Administration has its own audacious cycle; his famous Hope plays a big role:

\sarc
There's no "axis of evil" and Bush is an inarticulate moron.
\sarc

I'm sure all Japan will agree.

Does anyone think that maybe he actually wants a strike on US soil so he can claim a national emergency, impose martial law and round his "enemies" up?

Whatever is in Kimmy's brain should be analyzed in a safe environment by specialists wearing white coats. Maybe all Japan, Taiwan and South Korea should wear tinfoil hats when going tomorrow at work because nothing is going on, really.

I'm sure Husein will deliver them a speech as soon as he puts Merkel back to her place.

***
"Does anyone think that maybe he actually wants a strike on US soil so he can claim a national emergency, impose martial law and round his "enemies" up?"

Funny this used to be one of my worst Bush fears, that he would find some way, some new disastser/attack to keep from there being a peaceful handover in power. But thankfully, no...he went quietly into the night. But not before pushing this country as close as it has ever been to a dictatorship. But if you guys wanna continue to hyperventilate about the latest President, go ahead.

Seriously, this blog is out there. "tinfoil hat alert'? Maybe everyone needs to re-wrap them or replace the foil. Too much alien broadcast is getting thru, rotting your brain....

Maybe your BDS is rubbing off.

I never had BushChimpHitlerite zombies knocking at my door, asking me to pledge to support the spawn of Hitler's world-domination agenda. And taking my information to report back to the SonofHitler.

I never saw BushChimpHitler call out private citizens for exercising their freedom of speech in criticizing the government. No matter what you think of Rush or that Basso guy, that is truly troubling and incredibly creepy.

And BushChimpHitler had plenty of opportunity to do so, including when "patriotic dissenters" harassed and then vandalized the Marine recruiting office.

I do think, however, that it is very possible that had this
"crisis" happened earlier in the Bush administration, we may have seen him implement many of the same fascistic government-corporate alliances in the name of "saving" capitalism by killing it, or something.

So, now that your BDS has subsided, seriously, maybe you can explain how Bush pushed this country as close as it has ever been to a dictatorship. (You do know what Woodrow Wilson and FDR did to private citizens, right?)

I think the fact that the President of the United States thinks that it is appropriate for him to intimidate private citizens for exercising their rights is pretty "out there".

This blog's got nothin' on that.

Righty-ho. KJ-Ill just had a brain stoke and everyone cheered him as dead (except you, of course). Now what a cockroach like him will do when he senses his biologically end is near (considering there is a proven record that he doesn't give a rat's ass about his own people)? Not going down with a bang, is it? I assume you're a specialist in megalomaniac/paranoid disorder?

Maybe you should post more on a pro-Japanese/Korean/Taiwanese forum and assure them everything is ok for starters?

Maybe the unthinkable thought should cross your mind that is the JAPANESE, SOUTH KOREAN, and TAIWANESE people that are firstly uneasy about this launch, and not rabid right-wing white-power negro-hating KKK who are worried about NK?

Did you followed the Japanese/SK/Taiwan press for the past week? Of course it is a Bushist-Zionist conspiracy but hey-ho, sometimes it helps to know that the enemy is thinking, innit?

In the meantime please feel free to give a round of applause to your dear leader after his every second yawn, while laughing about us for wearing a tinfoil hat.

dear leader
that man in n.korea is going places if he can take care of his health problems salutes to the future prez of north and south korea's

is that a trick question? EVERYONE LOSES, children. To pick your options is to simply allow oneself to be cornered into picking sides. There is probably the same kind of person doing the same kind of thing on your enemenese sides

All sides must be stupid in this case, in the long run but this has been forewarned. You want to be hero don't drag people down with you. The boat is already rocking.

What's the newly minted term? A Contingency Operation, or whatever the fuck?

Another condescending post from a lefty who knows everything. How unusual.