In which the moronic rabbi reminded me of Moonstruck 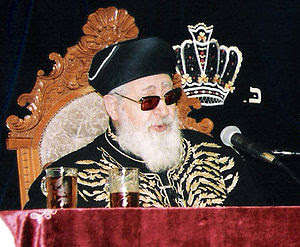 In the Oscar winning movie, Cher sees her fiance off to Italy and waves goodbye standing next to an old Italian woman who tells her she hopes no one Cher cares about is on the plane, because her sister is on the plane and she put a curse on the plane so that it should crash and they should all die.
Cher intones as how she does not not believe in curses, without batting an eyelash
The old woman rejoins with 'Neither do I'

Palestinians should perish from this world: Ovadia Yosef

JERUSALEM: Just ahead of renewed peace talks between Israel and the Palestine, an influential Israeli spiritual leader has denounced the move, dubbing the Palestinians and their leader "an evil and bitter enemies of Israel" who should " perish from this world."

But, Ovadia Yosef, spiritual head of the religious Shas party in the government, denounced the talks, scheduled to kickstart on September 2, and said, "Abu Mazen (nom de guerre for Abbas) and all these evil people should perish from this world,"

"God should strike them with a plague, them and these Palestinians," Rabbi Ovadia was quoted as saying during his weekly sermon at a synagogue near his Jerusalem home.

Somewhere, my grandfather is going, 'ok, ok so maybe the 5 Books of Moses is NOT the word of god. And jerks like this are somehow involved.

In case one wonders.... HEY OVEIDA, STFU and go to a mikva. With jews like this who needs arabs?

He's been living next door for too long. It's catching.

Rev. Jeremiah Wright wanted to insult Obama Muslim myth believers by calling them 'Ovadias' !
But, just on time he realized that the term is too offensive, so he changed it to something "softer" :- 'psychopaths'!

They are both on CRACK !

Wright got the thumbs up from "Paranoia" magazine, no less. That's proof positive that he has no credibility whatever. As if we needed proof.

I've had Christian friends who are little better than the Taliban when it comes right down to it.

What I mean by that is some Christian friends of mine openly discuss having a Christian government here on Earth, ruled by a King, Priests, and the Torah.

They believe such a government would be blessed by God.

There is no evidence of this in either the Bible, nor in the history of the world.

In fact, God made it pretty clear he thought the whole idea was nuts.

But, still my friends do talk about this, and openly admit their ideas aren't much different from the Taliban. The only significant difference, according to them, is, THEY ARE JUST while the Taliban are not.

These friends of mine are the kinds of ineffectual intellectuals who get together on weekends and smoke pipes while discussing Kierkegaard, Kant, and Francis Schaeffer. They don't understand women at all. (Yes, I actually have friends like this.) They will never accomplish anything.

Anyway, I bring this up because EVERY RELIGION HAS IT'S KOOKS. Christianity and Judaism are just better at keeping the kooks out of the limelight. And, let's hope we continue to be successful at that.

Because, I am convinced, it is MORE JUST.

Ovadia is an Iraqi leading a Moroccan political party... that borders on Arab/Paganism in many respects.

It's is very lucrative.

I don't understand. You're saying the Shas Party is a Moroccan party?

1 - Most of the Shas leaders are immigrants from north Africa.
2 - Most "Israeli North Africans" are Moroccans.
3 - Most of the "Israeli Moroccans" don't vote for the Shas party !
4 - Shas is the dead skeleton of the Ex Israeli "Black Panthers" Party from the 60's! The Logo is/was :- DISCRIMINATION ! BLACK Vs. WHITE ! ASKENAZI ANTI SEPHARADI (Orientals) !
And the Jewish Ethiopians were still in Sudan then!...

Most of the "Israeli Moroccans" don't vote for the Shas party !

But almost all of the idiots who vote for, and are leaders of,...Shas... are superstitious, primitive, Morochai.

I don't who they are, where they come from or what they think about the world .. anyone who follows some total idiot who leavens a curse from almighty on some people no matter their faults or stupidity should go directly to the 9th century, no, maybe the 3rd (BC) in Scythia and partake of the medical technology of the times.

Sheesh, if only there was such feedback every time the PA or others in the muslim world called for the total destruction of Israel! Seriously people, he is a very old man (89), who was referring to a prayer asking for the downfall of our enemies--and this is so much worse than the daily direct garbage from the PA along with calls to murder our children in cold blood?

"Sheesh, if only there was such feedback every time the PA or others in the muslim world called for the total destruction of Israel! "

But he gets no slack from me.
What he did was disgusting, ignorant, and counterproductive.

WE ARE NOT THE PA.

Isn't that the whole frickin point?