Happy Ramadan From the Associated Press: 19 dead in shootout in Russia's Caucasus 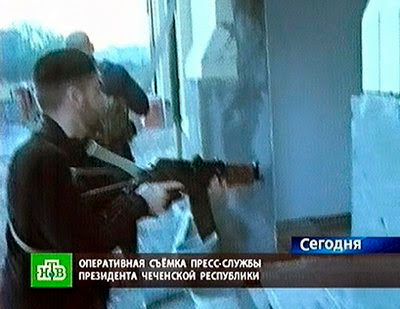 Absolutely no mention of Islam in this Associated Press article.

I'm pretty sure these "separatists", "militants", and "insurgents" were Muslims.

Someone correct me if I am wrong.

Kadyrov, who is thought to regularly supervise security operations in the field, was in the village at the time and directed the counter-offensive, Karimov said.

"We let them into the village so they couldn't escape," Kadyrov told Channel One television, which showed him examining the bodies of the suspected militants strewn across a road. "We forced them into a place where they could be eliminated," he said.

An AP reporter at the scene saw fire-ravaged and bullet-ridden homes, with body parts lying among the rubble.

Resident Vargan Edelgeriyeva, 48, said the gunbattle started at about 3 a.m. at a construction site about 150 meters away from Kadyrov's residence.

Militants entered local homes but were quickly surrounded, Edelgeriyeva said. In one house an insurgent detonated explosives, perhaps a grenade, killing himself and a 30-year-old resident, she said.

Police in 2009 averted a possible assassination attempt on Kadyrov, shooting dead the driver of a car suspected of containing explosives before he could reach a construction site where Kadyrov was due to make an appearance.

In a separate incident Sunday, security forces in nearby Dagestan province shot dead four suspected militants traveling in two cars when they refused to stop at a police checkpoint, according to police spokesman Magomed Tagirov. He said weapons were later found in the cars.

Kadyrov previously fought on the side of the rebels but switched sides and was installed by the Kremlin as Chechen leader in 2007. Comparative peace has arrived in Chechnya and its capital, Grozny, since then, but rights activists say the price has been brutal.

They allege Kadyrov has directed widespread human rights violations, including abductions and summary executions of suspected rebels and sympathizers.

Associated Press writers Sergei Venyavsky in Rostov-on-Don and David Nowak in Moscow contributed to this report.

UPDATED: Well, what do you know. Voice of America reports:

The Ruskies are gonna get fed up w/this crap and move into muslim areas in force and kill everything that breathes.
I'm surprised they haven't already.