Air Force Cheers General who stood up to Obama Administration 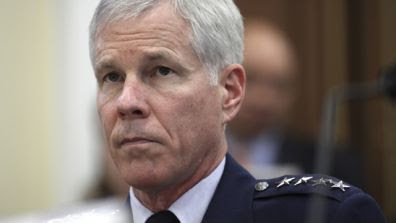 Hundreds of Airmen and at least one other General applauded the actions of Air Force General William Shelton, who told a congressional committee back on September 15th that the White House attempted to get him to change his testimony about the potential threat to national security relative to the plans of a company called LightSquared.

Gen. Shelton's view was that if LightSquared was granted the bandwidth it was requesting, its technology would encroach upon the GPS bandwidth necessary for military communications operations.

Military.com is reporting that Shelton was given resounding support by his colleagues and hundreds of Airmen at a recent forum:

During a forum of senior officers at the Air Force Association conference in Washington on Wednesday, the moderator complimented Shelton for giving his "unvarnished" testimony before Congress.

The applause of hundreds of Airmen and others broke out, interrupted only when Air Force Chief of Staff Gen. Norton Schwartz interrupted to make a comment of his own.Schwartz acknowledged Shelton's candid testimony in the face of the purported White House pressure.

"Will Shelton, I salute your courage."

The White House has reportedly said it offered only guidance to Shelton. Meanwhile, the House Science, Space and Technology Committee has launched an investigation into contacts between administration officials and LightSquared, according to the website NextGov.com.

The committee's chairman Rep. Ralph Hall, R-Texas, and the six other Republican lawmakers allege the administration sought to muzzle and soften the testimony Shelton and other experts on how the planned multibillion-dollar network could interfere with GPS receivers, according to the report.