Seems things have changed some.

Reading, Pa., my hometown, where I was born and still live 50 years later, the city I love for all it's problems and faults, is no longer the 6th most impoverished city in the nation.

We are now number 1.

No recession? No depression?

Reading, Pa., Knew It Was Poor. Now It Knows Just How Poor. 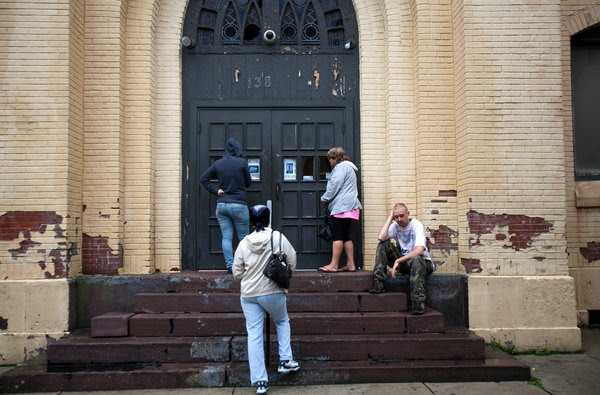 Jessica Kourkounis for The New York Times
Waiting outside a United Methodist Church for food and shelter in Reading, Pa.

Ashley Kelleher supports her family on the $900 a month she earns as a waitress at an International House of Pancakes. Louri Williams packs cakes and pies all night for $8 an hour, takes morning classes, and picks up her children in the afternoon. Teresa Santiago takes complaints from building supply customers for $10 an hour, not enough to cover her $1,900 in monthly bills.

These are common stories in Reading, a struggling city of 88,000 that has earned the unwelcome distinction of having the largest share of its residents living in poverty, barely edging out Flint, Mich., according to new Census Bureau data. The count includes only cities with populations of 65,000 or more, and has a margin of error that makes it difficult to declare a winner — or, perhaps more to the point, a loser.

Reading began the last decade at No. 32. But it broke into the top 10 in 2007, joining other places known for their high rates of poverty like Flint, Camden, N.J., and Brownsville, Tex., according to an analysis of the data for The New York Times by Andrew A. Beveridge, a demographer at Queens College.

Now it is No. 1, a ranking that the mothers at the day care center here say does not surprise them, given their first-hand knowledge of poverty-line wages, which for a parent and two children is now $18,530.

The city had been limping for most of the past decade, since the plants that sustained it — including Lucent Technologies and the Dana Corporation, a car parts manufacturer — withered. But the past few years delivered more closings and layoffs, sending the city’s poverty rate up to 41.3 percent.

Jon Scott, president of the Berks Economic Partnership, which helps businesses looking to stay in the area or move here, said that some of the city’s job losses were in fact furloughs, and that many businesses were considering opening in Reading, including an industrial laundry company at the former Dana site.

According to Mr. Beveridge, employment in the city dropped by about 10 percent between 2000 and 2010.

One of Reading’s more entrenched problems is education. Just 8 percent of its residents have a bachelor’s degree, far below the national average of 28 percent.

“Without a bachelor’s degree, forget it,” said Ms. Williams, 28, who is taking classes to earn her G.E.D.. Only about 63 percent of Reading’s residents have a high school diploma, compared with more than 85 percent nationally.

Lower education generally means higher poverty. About a fifth of people ages 25 to 34 with only a high school diploma in the United States were poor last year, compared with just 5 percent of college graduates, said Yiyoon Chung, a researcher at the University of Wisconsin, Madison. For those without a high school diploma, the rate was 40 percent.

Ms. Santiago, 36, has an associate’s degree from a local community college, but said that employers wanted to see more from job candidates. She lost her last full-time job in 2007, and has worked in low wage jobs without benefits through a temporary agency ever since.

“They even want a degree to be a secretary,” said Ms. Santiago, picking up her 8-year-old son at the center.

This city has had a large influx of Hispanics over the past decade. They moved from New York and other large cities, drawn by cheaper rent and the promise of a better life. That raised the flagging population, but also reinforced the city’s already acute problems with education: Just 18 percent of Hispanics in Reading had some college education last year, compared with 30 percent of the city’s whites. Only 44 percent of Hispanics had a high school diploma.

Young men have been particularly hard hit. Because they are having trouble competing for jobs, they are dropping out of the labor force, leaving women to support the children.

Ms. Kelleher, 23, said she had been supporting her three children as well as the father of two of them. She would not be able to survive, she said, without the $636 a month she gets in food stamps.

“For the past five years, it has been me paying the bills,” she said at the day care center, still in her waitress uniform. She wants to get married someday, she said, but only to a partner who is financially stable.

Sixty-two percent of young fathers in the United States earned less than $20,000 in 2002, according to Timothy Smeeding, a professor at the University of Wisconsin, citing the most recent data available from the National Survey of Family Growth.

Even for young people with a bachelor’s degree, the economy is making life difficult. Vickie Moll, who runs the day care center, said the number of applications from teachers who have lost their jobs had grown as the waves of budget cuts washed over the state. “We have people in here with bachelor’s degrees making $8 an hour,” she said.

Social services feel the effects, too. The Greater Berks Food Bank — Reading is the Berks County seat — is on track to distribute six million pounds of food this year, up from three and a half million pounds in 2007, said Doug Long, manager of marketing.

Pat Giles, a senior vice president at the United Way of Berks County, said: “It has really started to snowball. We have a growing population of younger, less educated, less skilled people. On top of that you have the economy going upside down.”

Modesto Fiume, president of Opportunity House, the organization that runs the day care center, as well as a homeless shelter and a transitional living facility, said the number of first-time families in the shelter was up sharply: of 23 new entries in June and July, 18 were homeless for the first time.

“People are here because they honestly and truly can’t find work,” said Delia McLendon, who runs the shelters. “It didn’t used to be that way.“

In the mid-1990s, welfare reform resulted in more women joining the work force. At the time, jobs were plentiful, but now work is scarce and low-income families’ lives have become hectic balancing acts to keep the few benefits they have.

Ms. Santiago loses her subsidized day care if she is out of work for more than 13 days, she said. The loss would take months to reinstate, so she hurries to find any work, whatever it pays, every time her temp job ends. Earning more than $10 an hour means losing health insurance, she said, though her children remain covered through Medicaid.

And jobs just seem to pay less. Ms. Santiago recently took a temporary job at a candy factory where she had worked more than eight years ago, when she was still in her 20s, before she had completed her associate’s degree. At the time she was making $10.50 an hour. In her most recent stint, her hourly wage was $9.25.

When there is an armed revolt in eastern Pennsylvania which occurs after FOOD RIOTS BREAK OUT AND MALLS AND SUPERMARKETS ARE LOOTED?

The entire economic structure is ROTTEN.

Get rid of the tax structure.
Fix low cost overseas labor swamping the US with UNFIXABLE unemployment

What are you guys talking about? The Unemployment rate is ONLY 9.1%

PAsto... can you imagine if they totaled unemployed + underemployed + those who are in jobs WELL below their rating (MS and PhD's and execs who have to lobotomize their history to get ANY job)?

I bet that number is WELL in excess of ANYTHING during the depression.

We r not at bottom. The FALL is still being determined.

First, I think real unemployment numbers are much higher than 9.1%

Besides that, I think underemployment (people like me who used to run companies/Execs who took jobs at 1/5 their previous salary are not uncommon at all. I work with a whole office full of such people.

Besides that, I will repeat a comment I left in another thread:

The Corporation I work for had a great first seven months.

THEN, OUR NUMBERS WENT OFF A CLIFF, and the falling has not stopped.

After two solid months of dropping numbers, with about 1/5 of our sales force on the verge of being fired (because they are not meeting our quotas) Management met with us yesterday.

I fully expected we were going to be threatened, chewed out, or at least given the mother of all "pep talks".

"Go get 'em guys. Don't let this get you down. We're in a rocky place in the economy. How do you feel about the kind of numbers your putting out? Do you want to do better? If so, we're here to help."

I've been in biz for over 25 years and I have never heard anything like it.

How can management help?

(Got the sarcasm btw)

CONFIDENCE in an expanding economy is the only Rx.
That means confidence the govt will identify what IT HAS TO DO to not make things worse.

They should be asking, "what do we have to do, to ensure the majority of the public has confidence in economic growth?"

THAT'S ALL THERE IS