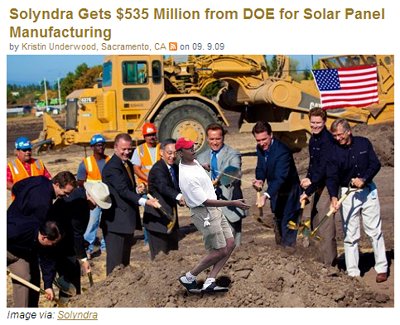 (DougRoss)
As one commenter noted after reading ABC News' reporting on EnergyGate and Solyndra:


There seems to be an inverse relationship between the president's popularity and the mainstream media's willingness to tell stories that need to be told. As Obama continues to slide in the polls, I'm sure we will find out all kinds of stuff that may have helped 2.5 years ago. While its too late now for everyone impacted by this administration's economic choices, there's hope that everyone will vote more responsibly next year... on both sides of the aisle.

• Kaiser's company received the loan before DOE received final copies of outside reviews of the deal.

• Spinner later wrote that he "helped oversee the more than $100 billion" in loans and guarantees.

• Westly was an investor in five firms that received half a billion dollars in energy grants and loans from DOE.

Put simply, if the Climatards are willing to waste billions enriching themselves in the name of green energy, then they can't really take the global warming scam seriously. In other words, the green tech movement no more believes in the global warming grift than you or I.

And, once again, where's the special prosecutor?

That means that the story is reaching a substantial portion of the electorate.