Will This Become The New "There You Go Again"? 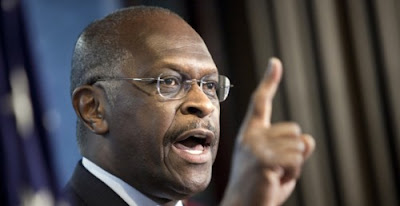 
After a few caffeine-heavy refills at our corner table, I asked him about President Obama’s new effort to raise taxes on the wealthy, and Cain just about blew a blood vessel–especially when I mentioned the part where Obama says it’s about “math” not “class warfare.”

Cain paused, took a breath and looked at me.“I’m not mad at you, I just get passionate about this stuff,” he said. “I have to tell people because I get so worked up . . . . I’m listening to all this bullshit that he’s talking about, ‘fairness’ and ‘balanced approach’ to get this economy going.”

As anyone who watched the past couple of debates knows by now, Cain has his own plan that he says would steer the country out of its economic downturn. He calls it the “9-9-9 Plan,” and it would replace the current tax code with three flat, nine-percent federal taxes on income, consumption and business.

“With 9-9-9 guess what? How many loopholes?” he said, tapping his fingers on the table like a drumroll. “None. Everybody gets treated the same. What a novel idea.”

As the straw poll and his recent fundraising numbers suggest, Cain’s message is resonating with the conservative movement’s influential base of tea-party activists; for these supporters his status as a non-career politician with an extensive background in the private sector is nearly as strong a draw as his ideas and policy proposals. But despite his recent surge in support, few expect Cain’s momentum to carry him on to victory at the Republican National Convention in 2012.

How is this for an POTUS Showdown?

Still my favorite and has been from the beginning. The only ones I see close to him are Santorum and Palin.

If it's momentum he wants, I think Cain should start directing the conversation to foreign policy and more specifically to the horrible mess that Europe has made for itself with regard to islamist infiltration. The wider American public would be stunned but enormously appreciative to learn all about the muslim no-go zones, the muslim rape gangs, the prison population demographics, the ceasless attacks on free speech, the impotent and pathetic political leadership class, the iconic murders - Theo Van Gogh, Pim Fortuyn, Charlene Downes, etc., the treasonous calls for sharia law, the shocking number of mosques, the supremecist aggression and attempts to dominate infidels, the moral inransigence, the attempts to shove halal food down everyone's throats, the fucked up education systems with their cowering teachers and whitewashed history, and on and on.

Cain should say nothing about similar things happening in North America until an irate eurotard left starts pointing its finger back and shouting - "YOU TOO!"
At that point he can demonstrate his deep knowledge regarding things like CAIR, MAS,the muslim brotherhood, domestic terror training camps, the Ground Zero mosque, school textbook manipulation of fact, etc.

It's time for a real leader.

Pamela and Robert would have you believe Cain is another Stealth Jihad candidate. Go read what Spencer is saying about Cain on his blog today.

Why do you think it is that Spencer and Geller keep attacking Republican frontrunners?

For that matter, why do people like Gaffney and Christine Brim choose to adopt strategies (like proposing an alliance between the counter-Jihad movement and the racist BNP) that only serve to defeat our movement?

In case you do not know, Gaffney, Brim, Geller, and Spencer all work together.

There is something very wrong in our movement.

I'd like to understand what it is, but I have no idea.

Yes, cjk, Cain has always been my favorite.

I thought, quite frankly, that his comments about not having Muslims in his administration would have sunk him permanently, and that is why I moved on to Perry.

But, Cain has surprised me with his ability to regain momentum.

I am afraid, however, that if he gets the nomination, those comments will come back to bite him in the ass big time.

Then again, perhaps, they will spur a much needed national conversation about the danger of Islamic infiltration.

If Cain gets bitten by his Muslim comments, he needs to stand up and say "Yes, I said that. Yes, I meant that. Here's why...."
I'd rather him go down fighting than just roll over and die.

Thus far, he has not shown that to be the hill he will die upon.

And, THAT is what Pamela and Robert are attacking him for.

And, my objection to Pamela and Robert is they are making the perfect the enemy of the good. Cain and Perry are both good candidates. They are certainly a million times better than the current seditionist in the White House.

We ought to be doing everything we can to get that guy the hell out. We ought not be wasting foolish energy on coming up with our own personal favorite boutique candidate.