From Barrack Now:
On today's program, I looked at the string of head-scratching incidents relative to the Bush administration's refusal to deal with the Islamic threat to the United States by the likes of Al-Qaeda Godfather Abdullah Omar Naseef. If you've ever wondered about the root causes of the animosity for the Tea Party that exists within the Republican establishment, the intelligence available to the Bush administration both before and after 9/11 about the perpetrators of 9/11 is something the establishment doesn't want Tea Partiers like Sarah Palin or Michele Bachmann getting too close to.

Naseef had distinct ties to the Saudi Arabian government; he was named in a civil lawsuit in 2004 by the families of 9/11's victims. However, he wasn't identified by the Bush administration as a target of American ire after 9/11, which he definitely should have been. Here is what Andrew McCarthy had to say about Naseef's history of escaping U.S. accountability relative to his ties to al-Qaeda:


…in 2004, he was named as a defendant in the civil case brought by victims of the 9/11 atrocities. (In 2010, a federal court dropped him from the suit — not because he was found uninvolved, but because a judge reasoned the American court lacked personal jurisdiction over him.)

The questions I posed were simple: Why was Naseef merely relegated to being a defendant in a civil case? Why wasn't he targeted by the Bush Administration? Why wasn't he prosecuted by Bush's Justice Department like, say, Abdurahman Alamoudi, who had been a State Department employee during the Clinton administration? In October of 2003, Alamoudi was arrested and ultimately convicted of financing terrorism.

If Alamoudi's background was given even a cursory look, it would have become obvious that Naseef was a bigger fish the administration should have been very interested in; it wasn't. Naseef skated and the threats posed by him and his underlings to America are graver than they've ever been. There was the reality of Bush granting access to Alamoudi despite big red flags. Here's a photo of Alamoudi standing with George W. Bush, circa 2000. 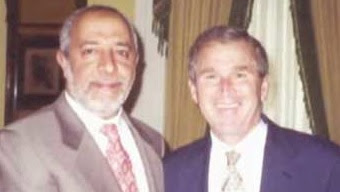 From History Commons, via Newsweek:


Presidential candidate George W. Bush and his political adviser Karl Rove meet with Muslim activist Abdurahman Alamoudi. The meeting is said to have been brokered by Republican lobbyist Grover Norquist. Little is known about the meeting, which will not be reported until 2007. At the time, Alamoudi is head of the American Muslim Council (AMC), which is seen as a mainstream activist and lobbying group. But Alamoudi and the AMC had been previously criticized for their ties to Hamas and other militant groups and figures (see March 13, 1996). Bush and/or Rove will meet with Alamoudi on other occasions (see (see July 2000, June 22, 2001, September 14-26, 2001). US intelligence learned of ties between Alamoudi and bin Laden in 1994 (see Shortly After March 1994); he will be sentenced to a long prison term in 2004 (see October 15, 2004).

Then, of course, there was Bush's decision to stand with CAIR six days after 9/11, at a mosque:

In 2002, a terrorist entity known as the SAAR Network was targeted by U.S. authorities. Both Naseef and Alamoudi were connected to SAAR (Alamoudi was an executive assistant). Yet, despite all of the evidence required to convict Alamoudi, we're to believe that the Justice Department just overlooked Naseef?!

Alamoudi wasn't the only terrorist who was given access to Bush. Sami al-Arian was another, viaHistory Commons:


Sami al-Arian attends a meeting in the White House complex with President Bush’s adviser Karl Rove. Al-Arian is one of 160 members of the American Muslim Council who are briefed on political matters by Rove and others. Al-Arian had been under investigation for at least six years by this time, and numerous media accounts reported that US investigators suggested al-Arian had ties to US-designated terrorist groups. Yet al-Arian passes the Secret Service’s stringent security check,enabling him to attend the meeting.

NEWSWEEK, 7/16/2001; WASHINGTON POST, 2/22/2003] “A law-enforcement official… [said] the Secret Service had flagged al-Arian as a potential terrorist prior to the event,” Newsweek later reports. “But White House aides, apparently reluctant to create an incident, let him through anyway.”[NEWSWEEK, 3/3/2003] In 2005, al-Arian will be found innocent of serious terrorism charges, but sentenced to almost three years in a US prison on lesser charges (see December 6, 2005). Abduraham Alamoudi is also at the meeting. US intelligence have suspected Alamoudi of ties to bin Laden and Sheikh Omar Abdul-Rahman since 1994 (see Shortly After March 1994). Rove and Bush met with Alamoudi in 1999 and 2000 as well (see 1999 and July 2000). Alamoudi will later be sentenced to 23 years in a US prison for illegal dealings with Libya (see October 15, 2004). [WASHINGTON POST, 2/22/2003]

The Republican establishment in general and the Bush administration in particular messed up in a major way by not going after the government of Saudi Arabia after 9/11. Any serious attempt to find out the truth would have led to Abdullah Omar Naseef - an al-Qaeda leader who was connected to the Saudi government.
We're left to conclude that the establishment will fight tooth and nail to prevent the truth about what it did (and failed to do) both before and after 9/11. Until these people come clean and 'fess up, America will be placed in ever increasing danger.
Posted by Pastorius at 2:49:00 am

THE ROP WAS A DELIBERATE STRATEGY INTENDED TO MINIMIZE THE POTENTIAL FOR GLOBAL WAR WITH 1 BILLION MUSLIM.

IT'S TOUGH TO GET THE GENIE BACK IN THE BOTTLE.

WHAT I MEAN IS WE ATTEMPTED TO MODERATE ISLAM BY DEMOCRATIZING IRAQ AND AFGHANISTAN BUT WITHOUT THE SAUDIS AND PAKIS AND IRAN CEASING THEIR AID FOR ISLAM IT JUST HASN'T WORKED OUT THAT WELL.

OBAMA'S ELECTION WAS THE END OF THE BEGINNING OF THE WAR.

ROMNEY WILL START THE BEGINNING OF THE END OF THE WAR.

It's getting to the point where I can't even look at a picture of a man I once respected.
Now I know how some of Joe Paterno's ex-admirers feel.

I actually do agree with you. And, I also think some of this associatiing with Amamoudi's and Naseefs is likely "keeping your enemies closer".

And, I agree that this strategy has not worked very well.

I was on board with it at the time.

And, we can never underestimate the behavior of those who adhere to Islam. They will always find a way to go lower than we could have expected.

Cjk,
I don't blame GWB as much as I used to.

1. It's hard to recognize Islam for what it is. "Islam is just another religion" has been the meme in higher education since God-knows-when. At least prior to 1968, when I entered college and encountered that meme.

Just look at courses in comparative religions! There's the proof of what I'm saying in this comment.

That meme has also now infiltrated elementary through high school. I know because I get that meme from every below-college student with whom I discuss the topic of Islam!

2. Because a similar attitude prevails all along the political spectrum.

Now, I DO blame Karl Rove. He's supposed to know better! I can't imagine that he doesn't.

Except for one thing....

Rove was trained in his art by people who worked for Reagan. Back then, Communism was THE threat. Rove may be corrupt -- but he also may have blinders.

One of the consequences of the fall of the USSR was the rise of Islam. WHO saw THAT coming?

I accidentally erased one of AOW's comments.

This is what it said:

Always On Watch has left a new comment on your post "America Is Not At War Against Islam, America is At...":

I was never on board with the GOP strategy.

I always had a sinking feeling that something like this had been tried during the period of Islamic Spain -- not exactly the same as times were different, but something similar. THAT didn't work out, either.

If we look at the history of Islam, we see over and over again the conviction on the part of Muslims. And they have always exploited any perceived weakness on the part of non-Muslims.

In my view, both Iraq and Afghanistan are disasters as far as real democratization goes. Self-rule needs to come from the bottom up -- not the top down, particularly if from the top down involves interference on the part of infidels.

AOW: He didn't have to trumpet that ROP lie every time he took a podium.
I do realize they had reasons for what they did as that I also generally agree with Reliapundit's remarks.
Either they didn't listen to or consider other views on Mohammedanism and strategy, or there weren't other views, I don't know which is worse. Surely someone had to object to the labeling of the most wicked system on earth as the 'ROP'.
The degree to which the POTUS pushed that ROP lie from hell (I mean it literally) is INEXCUSABLE to me.