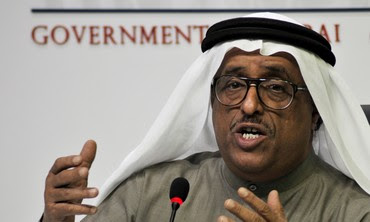 PHOTO: REUTERS
DUBAI - Dubai's chief of police has warned of an "international plot" to overthrow the governments of Gulf Arabcountries, saying the region needs to be prepared to counter any threat from Islamist dissidents as well as Syria and Iran.

The comments by Dahi Khalfan, one of the most outspoken security officials in the United Arab Emirates, follow the detention in the UAE since April of at least 20 dissidents, according to relatives of the detainees and activists.

"There's an international plot against Gulf states in particular and Arab countries in general...This is preplanned to take over our fortunes," Khalfan told reporters at a gathering late on Wednesday marking the Muslim holy month of Ramadan.

"The bigger our sovereign wealth funds and the more money we put in the banks of Western countries, the bigger the plot to take over our countries...The brothers and their governments in Damascus and North Africa have to know that the Gulf is a red line, not only for Iran but also for the Brothers as well."

Most of the detainees since April are Islamists, targeted by an official clampdown amid concern they may be emboldened by the rise of the Muslim Brotherhood in other Arab countries such as Egypt.

UAE Interior Ministry officials have not been available to comment on the arrests. Last week, UAE officials announced that authorities were investigating a foreign-linked group planning "crimes against the security of the state".

"I had no idea that there is this large number of Muslim Brotherhood in the Gulf states. We have to be alert and on guard because the wider these groups become, the higher probability there is for trouble," Khalfan said on Wednesday.

"We are aware that there are groups plotting to overthrow Gulf governments in the long term."
Posted by Pastorius at 2:18:00 am

We shouldn't be surprised. After all Petro-Islam is power!

The basic purpose of the MB, their mission statement, is to rescue the muslim nation from Jahilia, i.e. from Timor to Andalusia.

Imagine if we made it OUR public mission to make the world Jeffersonian and bent all policies diplomatically, social aid, medical aid, and the CIA to this end.

I wonder if the reactions around the world would be the same?