Russiahopes to establish its first naval base abroad since the 1991collapse of the Soviet Unionand is looking at Cuba,Vietnamand the Seychelles as possible locations, state-runRIAnews agency quoted the navy chief as saying on Friday.
Russia has been increasing the reach of its navy in recent years, sending warships further afield as part of an effort to restore pride project power in a world dominated by the U.S. military.
“It’s true that we are continuing work on providing the navy with basing outside the Russian Federation,” RIA quoted Vice AdmiralViktor Chirkovas saying in an interview.
The Soviet Union had a large naval base in Communist ally Vietnam but post-SovietRussiaopted to vacate theCam Ranhbase in 2002, duringPresident Vladimir Putin’s first Kremlin term, because rent payments were a burden on state coffers.
The fate of Russia’s only naval facility outside the former Soviet Union, a maintenance and supply facility in the Syrian port of Tartous, is uncertain because of the conflict in Syria.
Chirkov said Russia was “working out the issue of creating sites for material and technical support on the territory of Cuba, the Seychelles and Vietnam,” RIA reported.
Chirkov’s wording suggested facilities in those countries might be less extensive than full-scale naval bases. Navy officials could not immediately be reached for comment.
Vietnamese President Truong Tan Sang, who was in Russia and was to meet Putin on Friday, was quoted as telling a Russian radio station that Vietnam has “no intention of cooperating with any country with the aim of military use of the port of Cam Ranh”.
However, Sang was quoted as telling Voice of Russia radio that a maintenance and service facility at the port would be open to ships from all nations and that, in the interest of furthering a “strategic partnership” with Moscow, Vietnam “will provide Russia with advantages in Cam Ranh, including with aim of developing military cooperation”. 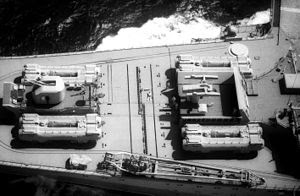 Didn’t we do this dance once already?
Slava and Kirov class cruisers based in Cuba? The former with 16 SSN-12 missiles each, range 400+ miles, 359 kiloton warhead. Kirovs with minimum 20 SSN-19 missiles. And storage facilities in Cuba? Service?
Would this COMPLETE STUPIDITY be because of our anti missile bases in Poland?
Roosians have ONLY one response. They are dependeing on their friend, I suppose who told Medvedev that after the election he would have more flexibility. They are just sending a message perhaps. Making sure.
Note that even Vietnam wants no part of the Rooskies
I have what is ironically the Chicago response, even though Mr. Obama only lives in that world with those who can do him no physical harm.

I'll be surprised if any of their rusting buckets can make it to Cuba.

The blackjacks made it to Venezuela, no sweat.

It is the Russians, not us who have developed, an entirely NEW class of ballistic missile subs (Borei), which will carry one of the 4 classes of new ICBM's.

We have developed NEITHER a new SLBM NOR any ICBM of any kind. In fact we are trying to get out of deployment and more R&D on weapons whose only target are missiles ENROUTE TO US.

It is the Russians who have developed and sold to MANY nations, nearly inaudible and CHEAP diesel electric Kilo and Amur subs

It is the USA whose navy today is smaller that it has been since Teddy Roosevelt's time, and whose budgets see it shrinking FURTHER.

Rust buckets? If it were only that simple.