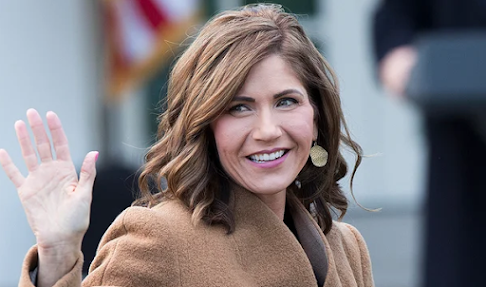 Kristi Noem’s Star May Have Faded Faster Than Chris Christie’s.

In 2020, a dire year for conservatives for many reasons, Noem became a bit of a cult hero on the right for standing up to the media and resisting COVID-19 restrictions. There was a high death toll in her state, but the deaths per capita were lower than several other states that were more locked down, including New York, where until recently, Governor Andrew Cuomo’s performance was praised by the media.

Over the past year, more and more people were talking about her as a serious contender to be on the 2024 Republican ticket — if not at the top of it.

But she may have blown all of that good will with the stroke of a pen. She took the wrong action, in the wrong manner, at a particularly heated moment in the cultural wars. She may never recover in the eyes of conservatives.

As Kurt Schlicter writes in an article headlined, “Oh Noem, Not Another Squish!” “Candidates, understand this. We are woke. We expect you to be woke. Period. If you don’t know what time it is, it’s time for you to go away. There’s no way to split the difference, no needle-threading or insulting ‘explaining’ that will mollify us. We didn’t like Trump because he was on TV (we didn’t watch that crap), or because he was an ideological conservative (he was not), or because he sent mean tweets (okay, a little). We supported Trump because he fought for us and did not compromise with the people who hate us and want us disenfranchised, subservient, or dead. Noem did not fight for us and she did compromise – she said on Tucker that she was afraid she might lose! – and now we will always have to worry that she will go all 1940 France every time the other side cries.”

There's a lot of that going around.

Anyone concerned about the 2024 ticket has their head up their ass. The whole enchilada is going to come crashing down long before that.