There seem to be a few of the now common problems with identity politics turning up in the pages of the new Teen Titans Academy series, as seen in these 2 panels coming from Inside Pulse: 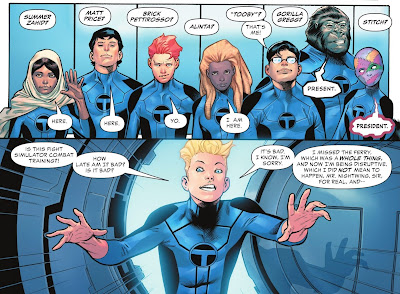 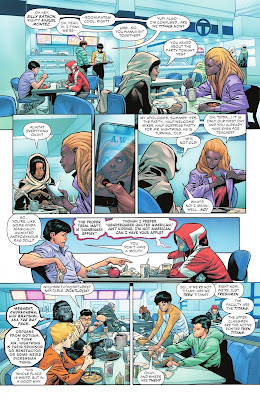 Let's see, we have here an apparently Muslim adherent named "Summer Zahid", and it should be noted the last name means "devout", "ascetic", "one who renounces the earth and fully devoted to allah", for example, in the Arabic language. So in other words, the writer in charge of this volume is using it as an excuse for Islamic propaganda. And then, as also seen in the 1st panel to 2nd panel, there's a mutant-like creature named Stitch who's non-binary, or "genderqueer".

And it all demonstrates a very sad comedown for a franchise that used to be considered very admirable when originally published during 1964-96, degenerating as it clearly has into a quagmire of identity politics, normalizing bad ideologies and even putting two contradictory ones in the same book while obviously pretending that's not the case. (Islam is opposed to homosexuality, and by extension to the transsexual ideology that grew out of it.) Yet another example of how current DC editor Marie Javins is little different from her predecessor, Dan DiDio, under whom much of this propaganda push first began in past years. I also noticed that the character design for Donna Troy and Starfire does seem fairly muted, especially when you consider the latter's costume, for some reason, isn't what it used to be when she first debuted in 1980. A terrible shame. It's even worse in some ways than Geoff Johns and Mike McKone's dreadful take on Teen Titans in the early 2000s.
Posted by Avi Green at 4:13:00 pm