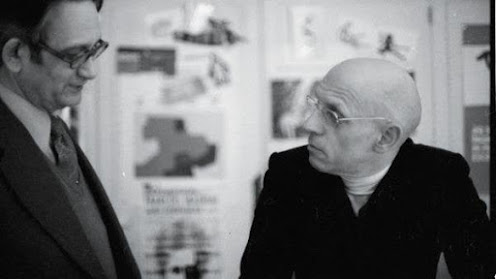 Here is the complete text of the article about French philosopher, Michel Foucault which we posted about yesterday. This guy is a hero to the left. He is a founder of all that Gender Theory horror show which is being used to motivate children and mentally ill people to get surgeries that mutilate and sterilize them, and which often leads to suicide or more surgeries to undo all these measures.

And here's the complete text of the article:

The philosopher Michel Foucault, a beacon of today’s “woke” ideology, has become the latest prominent French figure to face a retrospective reckoning for sexually abusing children.

A fellow intellectual, Guy Sorman, has unleashed a storm among Parisian “intellos” with his claim that Foucault, who died in 1984 aged 57, was a paedophile rapist who had sex with Arab children while living in Tunisia in the late 1960s.

Sorman, 77, said he had visited Foucault with a group of friends on an Easter holiday trip to the village of Sidi Bou Said, near Tunis, where the philosopher was living in 1969. “Young children were running after Foucault saying ‘what about me? take me, take me’,” he recalled last week in an interview with The Sunday Times.

“They were eight, nine, ten years old, he was throwing money at them and would say ‘let’s meet at 10pm at the usual place’.” This, it turned out, was the local cemetery: “He would make love there on the gravestones with young boys. The question of consent wasn’t even raised.”

Sorman claimed that “Foucault would not have dared to do it in France”, comparing him to Paul Gauguin, the impressionist said to have had sex with young girls he painted in Tahiti, and Andre Gide, the novelist who preyed on boys in Africa. “There is a colonial dimension to this. A white imperialism.”

Sorman says he regrets not having reported Foucault to police at the time or denounced him in the press, calling his behaviour “ignoble” and “extremely morally ugly”.

But, he added, the French media already knew about Foucault’s behaviour. “There were journalists present on that trip, there were many witnesses, but nobody did stories like that in those days. Foucault was the philosopher king. He’s like our god in France.”

With his trademark polo necks, a bald head and spectacles, Foucault, the son of a surgeon, was one of the first celebrity intellectuals of the 20th century remembered not only for his controversial analyses of prisons, madness and sexuality but for signing a petition in 1977 to legalise sex with children aged 13.

The best-known biography of him, The Passion of Michel Foucault (1993) by James Miller, describes his interest in the gay, sado-masochistic bath houses of America — he was one of the first openly gay figures in public life and died of Aids — but makes no mention of his sexual antics in Tunisia.

Foucault is the most cited scholar in the world, often associated with the rise of identity politics in America, where MC Hammer, the rapper, is one of his fans. “It is almost invariably Foucault to whom contemporary activist studies departments trace their intellectual foundations,” wrote Daniel Miller in The Critic magazine. “At the most basic level, Foucault the famous French professor supplies a signature of seriousness for disciplines without clear academic standards or traditions.”

In 1980s America, the “Foucauldians”, as the philosopher’s academic admirers are known, “enshrined Foucault as a kind of patron saint . . . whose authority they routinely invoked in order to legitimate in properly academic terms, their own brand of progressive politics,” Miller wrote in his biography.

Sorman, a prolific author, first aired his claims about Foucault in My Dictionary of Bullshit, a book he published this month, and referred again to the philosopher’s sexual misdeeds in Tunisia in a late night television chat show. The host was stunned: “You are talking about Foucault, according to you a paedophile, not something people usually recall when remembering him.”

Sorman’s claims have surprised specialists in Britain, where the last volume of Foucault’s four-part history of sexuality has just been published for the first time in English.

“There’s a big potential for that to have an impact on him,” said Phil Howell, a Cambridge University reader in historical geography. “Foucault was interested in sexuality and wrote about it, but child abuse is another thing.”

For Sorman, Foucault’s behaviour was symptomatic of a distinctly French malaise dating back to Voltaire. “He believed there were two morals, one for the elite, which was immoral, and one for the people, which should be restrictive.”

He continued: “France is still not a democracy, we had the revolution, proclaimed a republic but there’s still an aristocracy, it’s the intelligentsia, and it has had a special status. Anything goes.” Now, though, “the world is suddenly changing,” Sorman added.

He was far from being the only French celebrity figure with an inflated sense of entitlement. Over the past few years several tell-all accounts have prompted criminal inquiries into figures of the literary and art worlds accused of sexually abusing children in the heady aftermath of the 1968 student revolt.

The unburdening began in 2016, when Flavie Flament, a radio and television presenter, wrote a book accusing David Hamilton, the British photographer, of raping her when she was 13. “At the time I was still sucking my thumb,” she told me in an interview shortly after her book appeared. Hamilton killed himself a few days later.

Just over a year ago, Vanessa Springora, 48, a publisher, described in a book how she was groomed as a young teenager in the 1980s by Gabriel Matzneff, a fashionable novelist in his early 50s at the time. He had boasted about his paedophilia on television and won literary prizes for the books it inspired.

When this emerged, the Parisian elite was already in shock over revelations by Camille Kouchner, 46, the daughter of Bernard Kouchner, a former foreign minister, that her stepfather, Olivier Duhamel, 70, a leading intellectual and political pundit, had sexually abused her twin brother in the late 1980s when he was 13 and 14.

Neither Matzneff nor Duhamel have admitted the allegations nor have they been convicted of any offence.

The soixante huitards are on the defensive. Luc Ferry, 70, a philosopher and former education minister, argues that his contemporaries have much to answer for. “People had forgotten that 1968 thinking promoted paedophilia,” he wrote in Le Figaro. “Every adult had the right even the duty, they argued, to awaken the sexuality that the bourgeoisie was hiding.”

The accusations have prompted a new bill under discussion in parliament that would criminalise any sexual relations with a minor under the age of 15 — at present a child victim of rape must prove force.

Last week, however, there was discussion on a so-called “Romeo and Juliette clause” amendment intended to protect adolescent lovers. It would not automatically criminalise sexual relations with someone under 15 if the age gap between the two “protagonists” is less than five years.

President Macron has championed the change in the law — which has prompted chortling about how Brigitte, his wife, might have fallen foul of it when her relationship with her future husband began in the 1990s: he was 15 and she was his 40-year-old, married schoolteacher.

As for Foucault, he should not be “cancelled”, argued Sorman. “I have great admiration for his work, I’m not inviting anyone to burn his books, but simply to understand the truth about him and how he and some of these philosophers used their arguments to justify their passions and desires,” he said. “He thought his arguments gave him permission to do whatever he wanted.”

Brigitte wasn't just Macron's "teacher" -- she was his figure skating "partner"! Someone sent me a video the other day of them performing together. He looks about 10 and that would make her 35.

I was unwittingly introduced to the depth and extent of this pedophilia depravity about 40 years ago by a corrupt US Army PSYOPS operative and cult leader. Since then everything I've learned has only proven that it is worse than I could have imagined. Those who still deny its existence have got their heads stuck in the sand and are, in my opinion, passive enablers.

Question: Do you believe the whole Pizzagate thing?

And the idea that large numbers of power players in DC and the Media are in a conpiracy of silence and extortion over their pedophilia?