The Islamic World: The Children Should Be Punished ...

... for naming the Teddy Bear Mohammed. Or, at least that's what Abdullah al-Zawawi says over at the BBC: 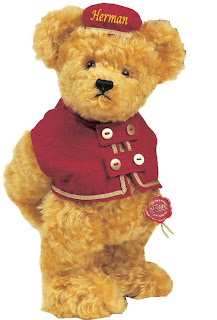 Speaking as a father I do not feel this was a well thought out plan by the teacher. However, I feel that she has done nothing wrong. The children themselves should be punished for having chosen the name of our great Prophet for a lowly bear. The teacher was misguided, whereas the children were malicious. They must be brought to answer for their blasphemy.
Abdullah Al-Zawawi, Sudan

I believe that, technincally, according to Islamic scriptures, Abdullah is right.

Reminds me of a quote from Winston Churchill:

"How dreadful are the curses which Mohammedanism lays on its votaries! Besides the fanatical frenzy, which is as dangerous in a man as hydrophobia in a dog, there is this fearful fatalistic apathy. The effects are apparent in many countries. Improvident habits, slovenly systems of agriculture, sluggish methods of commerce, and insecurity of property exist wherever the followers of the Prophet rule or live. A degraded sensualism deprives this life of its grace and refinement; the next of its dignity and sanctity.

The fact that in Mohammedan law every woman must belong to some man as his absolute property, either as a child, a wife, or a concubine, must delay the final extinction of slavery until the faith of Islam has ceasedto be a great power among men. Individual Moslems may show splendid qualities - but the influence of the religion paralyses the social development of those who follow it. No stronger retrograde force exists in the world."

So, if the children are punished, will the West grow a set?

Somehow I doubt it.

We ought to have enough compassion, when we look at those those trapped in Muslim societies, to stand up and say enough is enough.

But ultimately, those who deny there is a serious problem with Islamic culture do not truly care about the victims.

They might care if their children were the victims, but if it's just Muslim children, well then, they don't seem to care much.

There is "take two" to this story. Now they want the teacher dead

Vadim,
I guess that's not surprising.

Thanks for the link.