With the latest population forecast by the Office for National Statistics it seems we could get sharia law in the next 30 - 40 years. The talk is of immigration and birthrate being the main reason for this. Well I cannot see the white indigenous population reverting to large families of 5 - 6 children but that’s what Asians are producing now. None of the reports mention any of 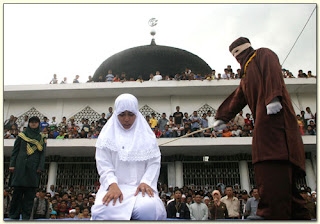 that, they don’t want to frighten us.
Official UN statistics said that the Muslim population of Europe doubled between 1997 and 2005. There is no indication that those statistics will be any different in the future. If we apply that to the UK, take the current Muslim population of an estimated 3m and double it every 10 years then by 2042 we will have a Muslim population 0f 48 million.
The indigenous white population will continue to decline with a birthrate of less than 1.4 children. I have no doubt that by then we will have handed over our country through the electoral process to the Muslims. There is no will from those that have the power to do anything about it. About 46% of Muslims favour sharia law. The Islamist tail wags the Muslim dog and then the Muslim dog morphs gradually and quietly into the British bulldog. Oh, where did the British bulldog go? Where are you now when we need you like never before?
Posted by Pastorius at 11:45:00 pm

Actually, Pastorius, this story was linked to the man who wrote it, Ray Boyd, of Common Sense Against Islam, a relatively new blog I have recently come across, and one which I feel shows great promise. So to re-iterate, this is a link to Ray Boyd's blog. It is not my original work; so I do not wish to take any credit for it.

Thanks for clarifying that.

And, thanks for posting it. I wouldn't have known about his blog if it weren't for you. I think I'll link to his blog in our blogroll.