Third Night Of Rioting In Paris

The "youths" continue to riot. You gotta wonder if these riots are planned at a higher level. Obviously, they were "provoked", but they are, apparently, being directed by adults. 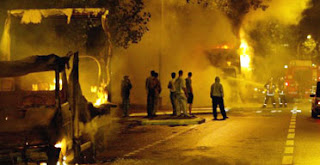 A report from Le Monde newspaper described boys as young as 13 taking orders from their elders to torch buildings and forming battle ranks against the police, vowing to "do in" a "pig" -- a police officer.

And, where are the adults getting their orders from?

This time the riots are even worse than in 2005.


VILLIERS-LE-BEL, France - Youths rampaged for a third night in the tough suburbs north of Paris and violence spread to a southern city late Tuesday as police struggled to contain rioters who have burned cars and buildings and — in an ominous turn — shot at officers.

A senior police union official warned that “urban guerrillas” had joined the unrest, saying the violence was worse than during three weeks of rioting that raged around French cities in 2005, when firearms were rarely used.

Bands of young people set more cars on fire in and around Villiers-le-Bel, the Paris suburb where the latest trouble first erupted, and 22 youths were taken into custody, the regional government said. In the southern city of Toulouse, 20 cars were set ablaze, and fires at two libraries were quickly brought under control, police said.


The International Herald Tribune has some analysis:

The rituals and acts of rage have an eerie sameness to them: roving gangs of angry youths clashing with the riot police in France's edgy suburbs, the government appealing for calm, local officials and residents complaining that their problems are ignored.

In one sense, the unrest seems to be more menacing than during the early days of the three weeks of rioting in 2005. Then, the youth seemed disorganized, their destruction largely caused by rock-throwing and arson and aimed at the closest and easiest targets, like cars. This time, hunting shotguns, as well as gasoline bombs and rocks, have been turned on the police.

"From what our colleagues on the scene tell us, this is a situation that is a lot worse than what we saw in 2005," Patrice Ribeiro, a police officer and senior union official, told RTL radio Tuesday. He added, "A line was crossed last night, that is to say, they used weapons, they used weapons and fired on the police. This is a real guerrilla war."

Ribeiro warned that the police, who have struggled to avoid excessive force, would not be fired upon indefinitely without responding.

More than 80 police officers already have been wounded the clashes, several of them seriously, Ribeiro said later by telephone. Thirty of them were hit with pellets from shotguns, and one of the wounded was hit with a type of bullet used to kill large game, he added. It is legal to own a shotgun in France - as long as the owner has a license - and police circles were swirling with rumors that the bands of youth were procuring more shotguns.

It is impossible to predict whether the violence will continue and spread to the much larger cluster of Parisian suburbs around the town of Seine-Saint-Denis, the area where violence was concentrated in 2005, or to the rest of the country.

It looks organized to me... and there wasn't really provocation for the start of this, just a traffic accident... Didn't you have a post a few days ago mentioning that bin Laden was preparing to address Europe? Coincidence?

TruePeers,
Here's a quote from an AFP article:

"A report from Le Monde newspaper described boys as young as 13 taking orders from their elders to torch buildings and forming battle ranks against the police, vowing to "do in" a "pig" -- a police officer."