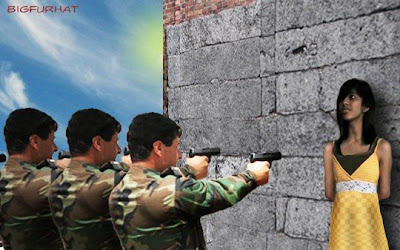 You have to go read Atlas' site on the subject of an email exchange between John Jay Esq. and Eric Fenner, Administrator of the Franklin County [Ohio] Childrens Services Dept.

i cannot conceive, in my wildest dreams, that a juvenile would be peremptorily returned to a family in which the encounter described by rifqa bary has been confirmed by the parents, and in which she alleges that she has been faced with death threats, and has been subject to continual physical and psychological abuse.

mr. fenner. have you noticed rifqa bary's right eye? have you any idea in the world, how it was injured? or, is that the sort of thing that interests the child protective services in the state of ohio.

i must admit, of course, that i never practiced dependency law in the state of ohio, nor before your courts in franklin county. perhaps the standards in your court, and in your protective service, as somewhat less than those standards administered in the courts before which i practiced, and very much less than the standards followed by the child protective services personnel with whom i worked. they [under]took the protection of juveniles, and their lives, which is, after all, dear sir, just exactly what we have at stake here.

and, of course, i never worked with a juvenile services administrator who was of a habit on issuing statements on the merits of cases pending in the courts, and who would say that no credible evidence of abuse exists in a case where a child has related being the recipient of a death threat.

usually, in my experience at least, cases are tried in court upon the admission of material and relevant evidence, (which sworn testimony most assuredly is), and not upon the newspaper prono uncement of service administrators who may or may not have the full command of the evidence to be presented in court. have you, sir, that you can make the statement attributed to you?

in good conscience, can you answer that in the affirmative?

she will be appointed counsel, and a guardian ad litem, and evidence will be taken and considered, will it not? or, does your opinion as expressed in the papers simply carry the day?

in previous emails i forgot to ask if you might have any bureaucratic supervisors with whom you have conversation about the duties of your position, and your purview to make public comment on cases which have yet to be decided upon their merits by a court of competent jurisdiction.

in my state[s], for instance, counties are political sub-divisions of the state, and i thought that situation might obtain as well in ohio. i would be curious, therefore, which department in the state of ohio, or perhaps the governor's office in ohio, might have direct supervision over your conduct.

would you be so kind as to respond to me with this information.

I report to a Board of Trustees that are appointed by a Board of County Commissioners, but just for clarification, exactly what public comments are you referring?

Oops, I guess he forgot.

Well, John Jay reminds him of the statements he made to the local media.