HOW THE US GOVERNMENT IS ELIMINATING FREE SPEECH FROM THE PAST, PRESENT, AND FUTURE

The CNN Interactive Community Boards are not the same as the CNN News pages that you linked to (Sept.12, 2002).

I was not alone in trying to get the ADL, FBI and CNN to take notice. The Israeli Government Coutner-terrorism authorities visited Washington 5 or 6 time a year to give material to Sandy Berger, and then Condi Rice. To no avail.

However, years later, the material was used in the prosecution of the Holyland Foundation members.....those who had not left the country during Bush's 4-6 month warning period.

More info from Michael at the bottom of the post.

Back in May of 2008, this article appeared in Wired Magazine. The actual title of the article was "FBI Targets Internet Archives With Secret 'National Security Letter', Loses".

Sadly, it does not seem to have worked out that way. 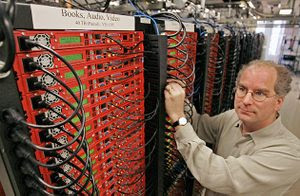 The Internet Archive, a project to create a digital library of the web for posterity, successfully fought a secret government Patriot Act order for records about one of its patrons and won the right to make the order public, civil liberties groups announced Wednesday morning.

On November 26, 2007, the FBI served a controversial National Security Letter (.pdf) on the Internet Archive’s founder Brewster Kahle, asking for records about one of the library’s registered users, asking for the user’s name, address and activity on the site.

The Electronic Frontier Foundation, the Internet Archive’s lawyers, fought the NSL, challenging its constitutionality in a December 14 complaint (.pdf) to a federal court in San Francisco. The FBI agreed on April 21 to withdraw the letter and unseal the court case, making some of the documents available to the public.

The Patriot Act greatly expanded the reach of NSLs, which are subpoenas for documents such as billing records and telephone records that the FBI can issue in terrorism investigations without a judge’s approval. Nearly all NSLs come with gag orders forbidding the recipient from ever speaking of the subpoena, except to a lawyer.

Brewster Kahle called the gag order "horrendous," saying he couldn’t talk about the case with his board members, wife or staff ...

When my friend Michael called me tonight and started droning on about it, I thought I was listening to another Conspiracy Theory. Michael was telling me that back in days of old, before blogging was invented, the "biggest thing on the internet" was CNN Message Boards.

Michael said he reported these threats to the ADL, who in turn, believe it or not, reported HIM to the FBI. Yes, that's right, Michael, who is a Jew and an Israeli citizen, claims he was reported to the FBI by the ADL for the crime of alerting the ADL to Islamic Jihadism and anti-Semitism.

Do you feel as if you have gone through Alice's Mirror, or what? Up is down. Black is white. Your don't know your ass from, well, let's let that one go.

And then, Michael started going on about how CNN eliminated these Message Boards, ERASED THEM.

I had a hard time believing this.

But this I could check, and I did.

Here it is. You go to the Wayback Machine. You type in www.cnn.com, and it takes you to a page that shows you the Internet Archive of CNN's history.

Click on April 10, 2001, just for the fun of it. Here's what you get. (Note, some of these load times are a long wait. Sorry about that. This is an archive, after all. Picture the Librarian getting out one of those old Periodicals of Periodicals and trying to work through the Dewey Decimal System for the precise old Periodical you are looking for).

Here's what happens when you click the Message Boards.

Now, click on the "Middle East" discussion boards. Here's what you get.

Did they also disappear the "Seattle Quake" discussion board from that day? Sort of, but sort of not. Something actually comes up. Here it is.

Ok, what about the "Mideast Peace" Message Board? Nope. It's disappeared.

Looks like Michael was right. They actually disappeared the Middle East Message Boards at the CNN Website.

(Ok, here's where my post goes wrong. I'll italicize and indent this whole section to note that it is a mistake -

Ok, so then I backed up and went to look at the September 11, 2001 Internet Archive. Well, what do you know, there is no page from that day.

There is, however, a September 12, 2001 Internet Archive Page. Here's what it looks like.

Does that reflect the news as you remember it on September 12, 2001?

And, do you notice the little blue and white World Trade Center advertisement down towards the bottom of the page? Does that look like something that would have been on CNN's front page on September 12, 2001?)

By the way, let's back up to the main CNN Internet Archive Page, and take note that there are no archives, at all, for 2009. Neither are there 2009 archives for CBS.com. I guess the Wayback Machine Internet Archive has given up business entirely. That is a damned shame, frankly.

Did the government put them out of business with a National Security Letter, after all?

What the hell is going on here?

Wow, thank you for pointing out such a stupid error on my part. That is embarrassing.

The CNN Interactive Community Boards are not the same as the CNN News pages that you linked to (Sept.12, 2002).

I was not alone in trying to get the ADL, FBI and CNN to take notice. The Israeli Government Coutner-terrorism authorities visited Washington 5 or 6 time a year to give material to Sandy Berger, and then Condi Rice. To no avail.

However, years later, the material was used in the prosecution of the Holyland Foundation members.....those who had not left the country during Bush's 4-6 month warning period.

Michael,
Do you want me to change the post to reflect those facts?