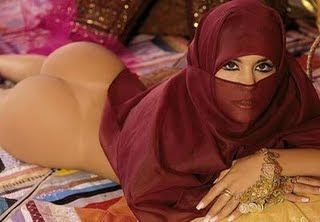 A guy goes in an adult store and asks for an inflatable doll.

The guy behind the counter says, "Male or female?"

The customer says, "What the hell does religion have to do with it?"

The counter guy says, "The Muslim one blows itself up!"

I still say either that girl's behind is not real or someone got all wild and crazy with the airbrush.

Well, I don't care whether its real or not but I was thinking, our Infidel babes should show more, um, "freedom" like that!

By the way, the joke really is stupid, however the picture is really going to piss off any Muslim that happens to stumble upon our website!

RRA,
I think you're right, probably. Though, I have seen some pretty amazing female derriere at my gym recently. Some of these chicks just focus on their ass exercises for hours on end.

Besides, you must have had quite the behind when you were younger if you could get away with wearing a macrame bikini.

There's only one thing to say about that chick's ass:

Yes, that is perfect.

I know this girl.