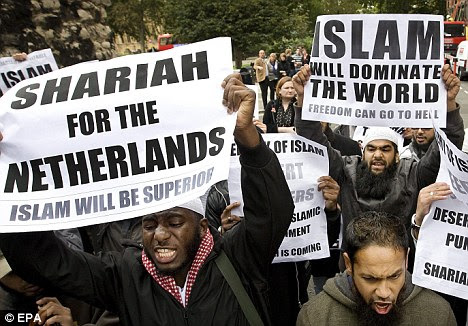 Geert Wilders, the Dutch politician opposed to the Islamization of Europe, arrived in Great Britain yesterday. He had previously been banned from Great Britain for openly opposing Islam and its violent, intolerant and murderous ways. The Brits, reflecting the insanity of liberal/left thought, regularly oppose free speech in favor of their unassimilable, hostile and seditious Muslim immigrants.
A mob of Muslim protesters were on hand to picket Geert Wilders outside the House of Parliament, waving signs that show they are anything but democratic or tolerant. They want to impose their 7th century bedouin culture on the modern world and the Brits and other Europeans are only too happy to accommodate them. Europe can't seem to commit suicide fast enough. Liberalism is a death wish.

I don't much like the signs these hirsute barbarians are carrying. I created the sign below as my response. I used the exact same font and the same colors as their signs. As always, feel free to use it, particularly in Europe, as a response to your growing barbarian population. 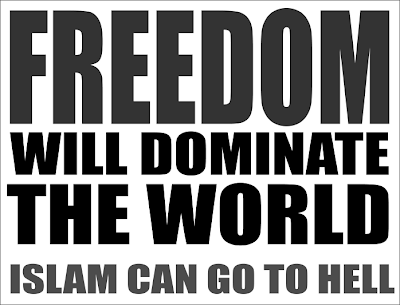 You can see the barbarians in the UK here, promising murder for Geert Wilders and promising to destroy the West. They emphasize that "insulting the Prophet" is a capital offense under Sharia law, which they hope to impose on the West.

Screw Muhammad, his religion and the camel he rode in on.

Wilders wants to form a new international organization to fight political correctness and cultural relativism. Will all so-called anti-jihadists get on side with the Wilders program, or will some turn against his consistent hard line against Islam, particularly wrt to immigration?

Jeppo,
I think you are right. Immigration is going to be a very thorny issue, until something really bad happens.

It's no accident. It is by design:

The huge increases in migrants over the last decade were partly due to a politically motivated attempt by ministers to radically change the country and "rub the Right's nose in diversity", according to Andrew Neather, a former adviser to Tony Blair, Jack Straw and David Blunkett.

He said Labour's relaxation of controls was a deliberate plan to "open up the UK to mass migration" but that ministers were nervous and reluctant to discuss such a move publicly for fear it would alienate its "core working class vote".

As a result, the public argument for immigration concentrated instead on the economic benefits and need for more migrants.

Mr Neather was a speech writer who worked in Downing Street for Tony Blair and in the Home Office for Jack Straw and David Blunkett, in the early 2000s.

Writing in the /Evening Standard/, he revealed the "major shift" in immigration policy came after the publication of a policy paper from the Performance and Innovation Unit, a Downing Street think tank based in the Cabinet Office, in 2001.

He wrote a major speech for Barbara Roche, the then immigration minister, in 2000, which was largely based on drafts of the report.

He wrote: "Earlier drafts I saw also included a driving political purpose: that mass immigration was the way that the Government was going to make the UK truly multicultural.

"I remember coming away from some discussions with the clear sense that the policy was intended – even if this wasn't its main purpose – to rub the Right's nose in diversity and render their arguments out of date."

The "deliberate policy", from late 2000 until "at least February last year", when the new points based system was introduced, was to open up the UK to mass migration, he said.

Some 2.3 million migrants have been added to the population since then, according to Whitehall estimates quietly slipped out last month.

On Question Time on Thursday, Mr Straw was repeatedly quizzed about whether Labour's immigration policies had left the door open for the BNP.

In his column, Mr Neather said that as well as bringing in hundreds of thousands more migrants to plug labour market gaps, there was also a "driving political purpose" behind immigration policy.

He defended the policy, saying mass immigration has "enriched" Britain, and made London a more attractive and cosmopolitan place.

But he acknowledged that "nervous" ministers made no mention of the policy at the time for fear of alienating Labour voters.

"Part by accident, part by design, the Government had created its longed-for immigration boom.

"But ministers wouldn't talk about it. In part they probably realised the conservatism of their core voters: while ministers might have been passionately in favour of a more diverse society, it wasn't necessarily a debate they wanted to have in working men's clubs in Sheffield or Sunderland."

Sir Andrew Green, chairman of the Migrationwatch think tank, said: "Now at least the truth is out, and it's dynamite.

"Many have long suspected that mass immigration under Labour was not just a cock up but also a conspiracy. They were right.