from The Last Crusade: 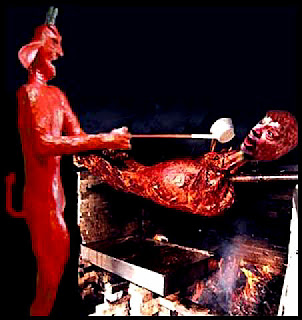 Jihadist John Allen Muhammad to be martyred next month.

The leader of the 2002 DC-area Islamic terrorist attacks will die by lethal injection next month, Virginia officials said Tuesday.

John Allen Muhammad was reported to be furious when told that his 72 virgins had been replaced with fire and brimstone.

Muhammad is scheduled to be executed Nov. 10 for the October 2002 slaying of Dean Harold Meyers at a Manassas gas station during a string of shootings.

Muhammad’s three-week Islamic-jihad in October 2002 left 10 dead in Maryland, Virginia and the District of Columbia.

Muhammad and his teenage “best little friend”, Lee Boyd Malvo, were also suspected of waging jihad in several other states, including a killing in Louisiana and another in Alabama. Malvo is serving a life sentence in prison.

Muhammad’s lawyers have asked the Virginia governor for clemency and plan to file an appeal with the U.S. Supreme Court early next month.

The Messenger of Allah (PBUH) was unavailable for comment.

I never buy lottery tickets, but I'd buy one this time if the prize was a chance to spin the dials on that particular injection machine.