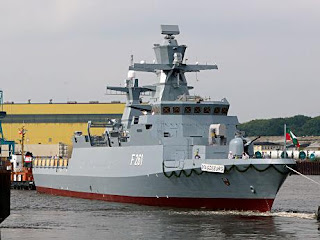 DEBKAfile's military sources report that the two corvettes are needed to meet the build-up of Iranian submarines and Syria warships in the Mediterranean Sea and defend coastal infrastructure facilities such as power stations and naval bases which Israel intelligence fears will be at risk in a regional war.

The order placed during Israeli chief of staff Lt. Gen. Gaby Ashkenazi's three-day visit to Berlin this week as guest of the German high command surprised the defense ministry. Germany is contributing 500 million euros toward the two Dolphin submarines already on order for the Israeli Navy. The new order is worth several million more. German sources report that the Israeli request has been referred to Chancellor Angela Merkel for her to decide.

The German corvette is a 2,200-tonner, 91 meters long and 13.4 meters wide. It carries a crew of 94, a medium-sized helicopter on its deck and 24 weapons systems - 16 sea-to-shore and 8 ship-to-ship launchers adapted to US-made missiles, as well as missile defenses and automatic cannons. It has a range of 7,400 kilometers and maximum speed of 30 knots. The corvette's great advantages for the Israeli navy are its formidable firepower and advanced radar-evading capabilities, making it extremely hard to spot by shore- or ship-based radar.

Before commissioning the warships from Germany, the Israeli Navy researched the market: After the US Lockheed Martin's product proved too pricey - $600 million apiece - purchasing agents opened negotiatons with the Hamburg shipbuilders Blohm and Voss. The initial plan was to have the order subcontracted to Haifa shipyards with Israel's aero industry and Navy installing the weapons systems and electronics. But in view of the spiraling tensions with Iran, Israel's high command decided to set about strengthening the country's marine defenses in the shortest time possible.

Also taken note of was the new clause inserted in the new Merkel government's coalition agreement: promising to phase out the Germany fleet operating off Lebanese shores as part of the UN peacekeeping mission: "Within the scope of the United Nations we will work towards a phased reduction of our German contribution to the Maritime Task Force of UNIFIL with the aim to terminate it."

Because the fleet to be phased out includes two corvettes, the possibility of transferring them directly to Israel instead of sending them back to home base in Germany is under consideration in view of the troublesome vibes besetting in the region.
Posted by midnight rider at 5:19:00 pm

delete these posts after you have read the

Shiva,
I went there, and it said "Error, you do not have access to this page..."

OOOPs could be because you are not registered

There is something very strange there, but one thing, they are not nazi,s

They are going to great lenghts to stifle any criticism of the koran and so called moderate moslems.

Maybe you can register with a different nick, some that I can identify you with

We may be able to a joint comment on this one, which would be interesting, to say the least, considering how we oppose each other on other issues