This story has absolutely nothing to do with the State of the Jihad, State of the Union, Obamanations, Tea Parties or Constitutional Amendments. Not even about guns.

Ain't that a relief? Several years ago, on a whim, a retired friend of mine took her father's old Martin Guitar to a local Guitar Expo. 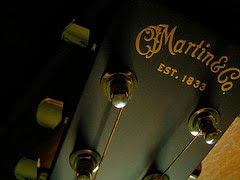 ondition. Remarkable because she had kept it in a closet for the last quarter century. In it's original case. With the original sales slip from 1932.

I do not know the model number since she is not a musician and had no idea.

At the show many collectors would yawn when she asked them to look at it. Until she'd open the case.

Thus did a bidding war break out between a collector in Michigan and one in Connecticut.

Over the next couple weeks as things were being haggled out she would agonize with me over whether she should sell it. On the one hand it was her father's, a very personal family heirloom. His pride and joy. On the other she did not have the wherewithall to keep a guitar like that as it should be kept. In a non-climate controlled closet was courting disaster. Nor was she comfortable having something now known to be that valuable in her home.

Being ever the friend and having two Martins myself (new models) I suggested she should just give it to me.

That didn't work out as well as I had hoped.

Eventually the bidding war ended and the fellow in Connecticut won.

A helluva return on investment for something her father paid less than a few of today's hours wages for in 1932.

I doubt you'll hear a story like that about something stamped Made In China. . . 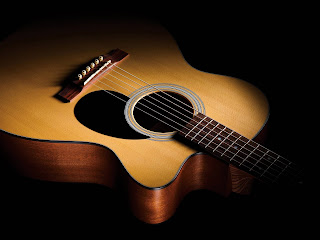 I have always envied those who grew up in musical households, where instrumental ability was second nature, like slowing down when you spot a cop on the highway. If fine literature was in short supply in my boyhood home, musical instruments were even scarcer. I may have been the first in our family to have owned a stringed instrument, let alone learn to strum a few chords. I suspect this was because our family tree sprouted in hard German soil, and while the greatest classical composers may have been Krauts, you do not find many folks with Teutonic names on the country-western charts, and even fewer in my CD collection. (Paul Westerberg is probably the exception.)

My non-musical upbringing notwithstanding, I was, like many boys, attracted to the guitar, and in my youth I ran through a series of hundred dollar Silvertones and Washburns, none much better than rubber bands strapped across a shoebox. But all the while I knew exactly which ax I would grind if I ever saved up some real dough.

That day came about twenty years ago, when I purchased my first Martin. A Martin 15-Series Auditorium mahogany flat top acoustic, to be exact. I will never forget entering the little guitar shop on Main, wearing a look of haughty disdain as I strode past the Gibsons, Taylors and Guilds. "Just show me the Martins, my good man," I told the clerk, who proceeded to ignore me for twenty minutes.

My obsession with Martins doubtless had something to do with a long ago visit to the Country Music Hall of Fame in Nashville. The Hall is like a musical candy store where one goes to gape at and drool over world's most famous "starvation boxes," which is what the old pickers in Nashville call guitars. What impressed me most was the fact that nearly all of the enshrined six-strings came from the same Lehigh Valley factory. There was Johnny Cash's D-35S, Hank Williams' D-28, and Jimmie Rodger's 00-18. Sure, there was the occasional Buck Owens' red, white, and blue custom-made Mosrite or Elvis Presley's Gibson J-200N (the King rose to stardom playing Martin D-28s, and would return to them in his latter years), but the Gibsons et al. were most notable by their conspicuous absence.

Not all legendary guitars end up in museums. Jimmie Rodgers' second wife, Carrie, lent the Blue Yodeler's 000-45 to Ernest Tubb, who played it another 40 years before retiring it to the Jimmie Rodgers Museum in Meridian, Mississippi. And Neil Young, in the early 1970s, purchased one of Hank Williams' D-28s from music shop owner Tut Taylor, which he plays to this day. Carrie Rodgers had the right idea, though. Unlike children, such guitars should be both heard and seen -- preferably live and on stage.

Or, perhaps, my obsession has to do with the history of C.F. Martin & Co. How one of America's oldest manufacturers (and the oldest surviving guitar maker in the world) has managed to remain in the same location and in the same family for six generations. Not to sound like a clunky cliché, but it is the story of America itself.

CHRISTIAN FRIEDRICH MARTIN, SR. was born in 1793, in Markneukirchen, a city on the German-Austrian border. Called the musical instrument making capital of Germany, the city is known for its stringed instruments, and its violins in particular. The Martins were a family of cabinetmakers, who had begun dabbling in the burgeoning guitar-making trade, when 15-year-old Christian Friedrich was shipped off to Vienna to apprentice with renowned luthier Johann Stauffer. Back in Markneukirchen, Martin set up his first shop, where he coined the family motto: "Non Multa Sed Multum. Not many but great." Soon, however, he became embroiled in a dispute with the violinmakers' guild, which did not like the idea of cabinetmakers muscling in on their territory. At length, Martin got fed up with the bureaucracy and the stifling regulations the guild system placed on gifted and enterprising young craftsmen, and he and his wife Ottilie boarded the first ship bound for the New World.

The Martins settled on New York's lower west side, but they could never get used to the big city, and they soon relocated some 80 miles west to rural Nazareth, Penn., which was, in many ways, reminiscent of Christian Friedrich's native Saxony. One hundred and seventy-four years later, the Martin family is still making acoustic guitars in Nazareth, and the instrument has never sounded better.

That's the story. An immigrant makes good after fleeing a creativity-stifling, over-regulated society. One wonders if America is still a place where gifted entrepreneurs can come to escape bureaucracy and regulation, and scope out a level playing field on which to flourish. Or is America's story now one in which we drive prospective CF Martins away?

Christopher Orlet is a freelance writer based in Columbia, Illinois.

Aaaaaaaaaaaaahhhhhhhhh! G-d bless you my friend!

Few things are as beautiful and smell as nice as a Martin Guitar! (Just one,,,and that one is becoming scarce.)

And it still plays. I've got the RCA Victrola to play the record on.

Yodeling was Rodgers's trademark, of course.

HERE is the song I was referring to: "Hobo Bill's Last Ride."

Although others might see the yodeling as an acquired taste :)

Beer & Guitar articles. Hmm. I think we might be able to work on that. . .