from Her Royal Whyness
YOU'VE GOT TO LOVE THIS RANCHER'S OUTLOOK & COMMONSENSE APPROACH TO LIFE ...... 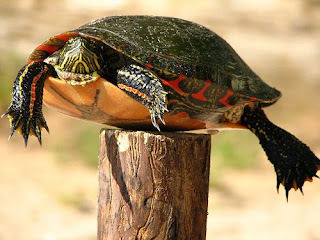 While suturing up a cut on the hand of a 75 year old rancher, whose hand had been caught in the gate while working his cattle, the doctor struck up a conversation with the old man. Eventually the topic got around to Obama, and his being our president.

The old rancher said, "Well, ya know, Obama is just a Post Turtle."

Now not being familiar with the term, the doctor asked,

The old rancher said, "When you're driving down a country road and you come across a fence post with a turtle balanced on top, that's a post turtle."

The old rancher saw the puzzled look on the doctor's face so he continued to explain. "You know he didn't get up there by himself, he doesn't belong up there, he doesn't know what to do while he's up there, he sure as heck ain't goin' anywhere, and you just wonder what kind of dumb ass
put him up there in the first place."
Posted by midnight rider at 2:14:00 am

To all those asking me,
Why the sorrow, why the Evil ?
Look at the Photo and see
The twisted mind of the Devil !