October 22, 2012
by Voice of America News
Hundreds of additional Islamist fighters have deployed in northern Mali, as neighboring countries make plans to send troops to the troubled nation.
According to witnesses, the fighters began deploying last week, after the U.N. Security Council passed a resolution asking West African bloc ECOWAS to submit its plans for a Mali force.
Residents report seeing hundreds of Tunisian and Egyptian militants in the city of Gao, while many other militants went to the central town of Douentza, close to Malian army positions in Mopti. 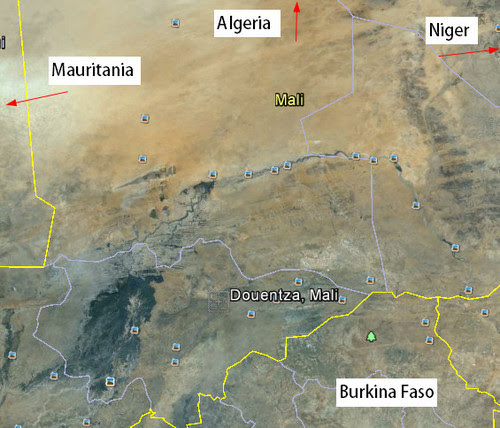 Mali’s interim government has called for help to oust Islamist militants who seized control of the north after a March military coup in the capital, Bamako.
In an interview with VOA Monday, a spokesman for Islamist group Ansar Dine said he could not confirm an influx of foreign fighters.
But the spokesman, Sanda Ould Bouamama, said Muslims have an obligation to help the militants in what he called an unjust and illegal war against Islam.
On Friday, Mali’s interim president called for swift foreign intervention to retake the north.
The al-Qaida linked militants in the region have carried out public executions, amputations and floggings in an effort to enforce their strict version of Islamic law.
ECOWAS has proposed sending some 3,000 military personnel to Mali to help stabilize the country, train the army, and oust the militants. However, some Malians object to the idea of foreign intervention.
Posted by Epaminondas at 12:28:00 pm