Why Are Liberals So Friggin' Stupid? 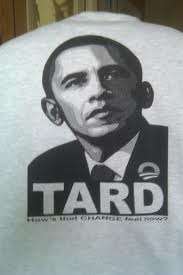 From the esteemed Victor Davis Hanson:


Note that Barack Obama is running not on his liberal record, but as a challenger against incumbent Mitt Romney who has done all sorts of terrible things like causing the 2008 meltdown and outsourcing jobs to China. In Obama’s view, given the supposedly tranquil world abroad, we must try nation building at home, and thus concentrate on bold new initiatives like stimulus, infrastructure, green jobs, and federalized health care — none of which have been envisioned before, much less funded. And to the extent Obama has a concrete example, he points to efforts of the private oil sector to find more gas and oil despite, rather than because of, his own efforts. Conclusion? Obama himself apparently has given up on liberal ideas in lieu of Big Bird, binders, bull****ter, movie stars, and hip-hopsters, which prompts the question: does anyone believe in liberal ideology anymore — and if so, why?

Did California’s redistributive elite really believe that they could all but shut down new gas and oil production, strangle the timber industry, idle irrigated farmland, divert water to the delta smelt, have 37 million people use a highway system designed for 15 million, allow millions of illegal aliens to enter the state without audit, extend free medical programs to 8 million of the most recent 11 million added to the population, up taxes to among the highest in the nation, and host one-third of the nation’s welfare recipients — and not have the present chaos?

The California schools — flooded with students whose first language is not English, staffed by unionized teachers not subject to the consequences of subpar teaching, and plagued with politicized curricula that do not emphasize math, science, and reading and writing comprehension — scarcely rate above those in Mississippi and Alabama. Did liberals, who wanted unions, a new curriculum, and open borders, believe it was good for the state to have a future generation — that will build our power plants, fly our airliners, teach our children, and take out our tumors — that is at the near-bottom in national test scores?

Do Bay Area greens really believe that they that will have sufficient water if they blow up the Hetch Hetchy Reservoir? [1] Did Barack Obama think that the Keystone pipeline or new gas and oil leases in the Gulf were superfluous, or that we do not need oil to make gasoline, wheat to make flour, or to cut timber to produce wood?

Did liberals (and their hand-in-glove employer supporters who wished for cheap labor) think that letting in millions from Central Mexico, most without legality, English, or a high school education (and in some sense at the expense of thousands waiting in line for legal admission with capital, advanced degrees, and technological expertise), was not problematic and that soaring costs in law enforcement, the criminal justice system, the schools, and the health care industries were irrelevant?

What, then, are the motivations that drive so many to such absurdities? Note here that I am talking of the architects of liberalism, not of those who receive generous entitlements and whose desire for bigger government is thus existential and elemental.

Equality of result
Keen minds from Aristotle to Montesquieu and Tocqueville have lamented that the proverbial people sometimes prefer equality under authoritarianism to inequality accompanied by personal freedom. As long as there was grinding poverty, the liberal agenda of “leveling the playing field” made sense enough — Social Security, disability insurance, the 40-hour work week, and Medicare. But once modern mass production and consumption arose, energized by globalization and the entry of billions of new foreign workers into the equation, and high technology extended the appurtenances of the aristocracy to the poor (today’s ubiquitous smart phone is 100 times more versatile than yesterday’s $3,000 primitive suitcase cell phone), how could you keep promoting government-sponsored equality for the less well-off? Ensure no one has to drive a Kia? Petition on behalf of those who do not yet have an iPad?

Weighing over 250 pounds, not rickets, is a national plague. Riots target sneaker stores, not food bins. Sandra Fluke naturally become the epitome of frustrated liberal-mandated equality. We are to believe that an upscale white law student, who by choice enrolls at a Catholic university, is deprived because her university will not pay for her condoms or abortion pills. Her cell phone no doubt costs more than a year’s supply of prophylactics [2]. The result is psychodrama, not class struggle, as liberals strain to find ways in which America is Les Misérables rather than the Kardashians, plagued by this obsession to step in and make everyone (except themselves) the same.

I agree with the statement but I'm always hearing how liberals are "well" educated. I have degrees in Math & Electrical Engineering. I'm a person of logic & reason. I know many "liberals" who are supposedly well educated but trying to have an "intelligent" logical discussion with them makes me come to the conclusion they are truly low IQ ignorant koolaid drinking zombie sheep.