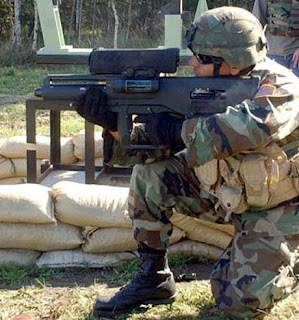 The U.S. Army is testing a new rifle in Afghanistan.  Known as the XM25, the new gun weighs about 13 pounds and fires a 25 mm round.  The truly innovative idea embedded in the rifle is the bullet.  Instead of having to aim directly at Mr. Taliban, the round need only be aimed at a place in proximity to Mr. Taliban.  Once there, it explodes and the fragments kill Mr. Taliban.  It knows when to explode because of a timed fuse - - a small computer inside the bullet monitor details of the projectile’s flight.  Each rifle bullet is programmed before it is fired by a second computer in the rifle itself.  To determine the distance to the target, the gunman shines a laser rangefinder attached to the rifle at whatever is shielding the enemy.

So the world of bits and bytes, lines of code, and computers has come to the simple bullet.  When IT makes it to the bullet - - you have to wonder how and when it comes to everything else.  The next time you drive across the bridge near your home - - think about where, how, why, and when you could start to see lines of codes in the “simple bridge.”  Sure, your car is full of software, but what about the pavement you drive on?  You might have a smart water meter powered by software - - but the water lines are void of any lines of code and are pretty dumb.

If we can embed bullets with software and make them smarter - - it seems to me that we have a very long list of everyday products and public infrastructure in need of smarts supported by lines of code and algorithms.

I have a better idea than cutting down the army with the advent of such weapons. Half the infantry with XM-25’s, and half with M-4’s, WITH BAYONETS.
Wouldn’t this be a cheaper way to DETER WAR?
Posted by Epaminondas at 5:35:00 pm

This and the missile that shuts down electronics = no more enemy.