In the UK, Freedom of Speech is not a protected right. It is a platitude, meant to be repeated like a New Age Mantra, to make oneself feel warm and tingly.

But, when the chips are down, the Police can arrest you for "Conspiracy to create a Public Disturbance", and they can hold you for the rest of your life, with the support of the Laws and the Justice System.

That's not Justice. That is not Human Rights. That is a Fascist Police State, meant to crush any disagreement. 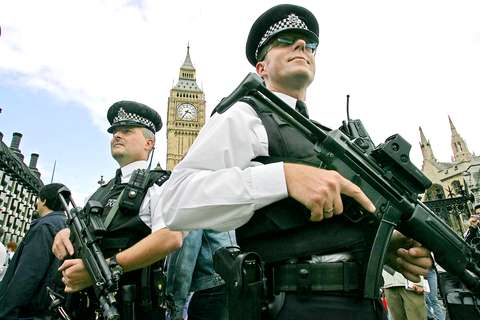 From Pamela Geller at the American Thinker:


The arrest of over 53 people in the United Kingdom is the beginning of the end for once-great Britain.  The leaders of the English Defence League (EDL), Tommy Robinson and Kevin Carroll, were among those arrested, as well as Paul Weston of the British Freedom Party (BFP).
I spoke with Kevin Carroll about his recent arrest and that of Robinson and Weston, and he told me the appalling details.
Carroll told me that British authorities tried everything in the book to stop him from running for police and crime commissioner (PCC) for the Bedfordshire Police Authority.  Nonetheless, he officially won the right to run for PCC last Friday.  But then, the very next day, British authorities carried out these mass arrests of EDL and BFP members, stripping them and forcing them to wear white paper overalls like those given to incarcerated terrorists.  They were allowed no phone calls.
Meanwhile, British police raided the homes of Carroll, Robinson, and three others who had been arrested.  "They absolutely ransacked mine," Carroll told me.  "They smashed the door off and wrecked my home.  They took my only vehicle, with all the tools of my trade inside, and impounded it, as well as Tommy's car."
The police, the bomb squad, forensics teams, and sniffer dogs spent seven and a half hours stripping Carroll's van to the bone.  "When they finished," he said, "they found nothing!
They loaded it up with bugs and GPS monitors and threw everything in the back; it looks like it's been in a blender."
After smashing the door to Carroll's home off its hinges, police officials repaired it, got a locksmith to put on a new lock, and left with the new keys, leaving Carroll locked out of his own home.  When Carroll was released, still wearing his white paper prison suit, it was dark and raining; true to form, police officials offered him no transportation, even though it was late at night on a Sunday.
Robinson is being held in Wandsworth prison, an old and antiquated structure with a large population of Muslim prisoners.  Weston was arrested and later released without charge for refusing to leave a reception area without information about Robinson.  And it is clear why officials would not want that information to get out: not only has Robinson been placed with the general prison population instead of segregated for his own protection, but prison officials have even put him in a cell with hostile Muslims.
He was allowed to call his wife Jenna, and he told her that he knew it was going to be "lively" in the cell.  That was an understatement: prison officials have deliberately put Robinson in physical danger and even imperiled his life.  Carroll contacted a high-ranking police official to request that Robinson be segregated, and she received a promise that he would be, but it hasn't happened yet -- and Robinson has even been denied bail.
"They are really coming at us with everything," Carroll told me.  "I'm even on police bail at the moment for 'conspiracy to cause a public nuisance.'"  This is a politically motivated and trumped up charge, but in Britain it can carry a life sentence.
According to Carroll, Robinson was incarcerated for leaving the United Kingdom and entering the United States fraudulently for our September 11, 2012 Stop Islamization of Nations free speech conference in New York City.  Robinson could get twelve to eighteen months in prison just for that.  "They are really turning up the heat here, Pamela," said Carroll.  "They are going after all of us, especially Tommy and me."  The EDL said in a statement: "Tommy has been dragged from one court to another -- almost always without any serious chance of conviction -- simply in order to help disrupt our activities and to prevent us from voicing our legitimate concerns about the spread of Islamic extremism."
Carroll's bail hearing is set for November 30, which gives him just two weeks after the November 15 elections to prepare his defense.  Anyone who can vote for Bedfordshire police authority commissioner and who loves freedom should vote for Kevin Carroll; it could be your last hope to preserve the freedom of speech and the principle of the equality of rights for all people in Britain.
Clearly the establishment elites in Britain are extremely worried that Carroll might win and upset the entrenched culture of accommodation to Islam and sharia; in fact, one of the briefs in Carroll's case actually stated that this was why he was arrested -- because he is running for PCC.  The dhimmi elites understand that this could be the beginning of their end.  "The police," said Carroll, "are out to finish us on behalf of the establishment."
This is a defining moment in British history, as significant as any major turning point.  It is in many respects like the Night of the Long Knives, which marked the point of no return from Nazism for Germany.  With these outrageous and politically motivated arrests, Britain has entered a dark and dangerous new era.  Said Weston: "The full power of the State appears to be concentrating on shutting down any political dissent.  This does not really feel like a democratic country anymore."
Carroll is organizing a demonstration outside Wandsworth prison this coming Saturday morning.  All free citizens in Britain should be there.  And is there no one is the political establishment in the U.K. who has any decency, integrity, or spine?  No one who will stand up against these outrages?

Is this story FINALLY gaining some traction? It must! Because what's happening in the UK eventually will make its way across the Pond!

I'm glad Pamela wrote this. It needs to get out.

I can't tell the difference between Britain and the UAE (insert any other Muslim nation if you'd like) anymore.

Christians can go to church in Dubai, seemingly no one disturbs them but the moment you piss off Muslims, you're done for.

You can be held by the police and put in situations where your life might be endangered, all of this is done without restraint and no one can question whether what the police is doing is lawful or not.

If something the government wants to do is not on the books yet, they can add it without a problem, usually in accordance with the Shariah, and make it lawful.

I forget whether I was just describing the UAE or the UK...

Nico,
Britain has far more freedom than the UAE, but yes, things are getting bad.

You're right. Britain has far more freedom than the UAE no doubt about it. But things are usually worse when countries are going through change than when the dust settles.

Let me give you an example of what I mean.

When my wife and I were in the UAE, we noticed the frustrating trend of the Sheikhs changing the laws of the land to suit their needs every 6 months or so. We thought that was excessive use of power by dictators who only cared about themselves and no one else. We couldn't wait to leave that country where human beings didn't matter. Everyone was at the mercy of the Sheikhs.

Now we've been in Argentina for about 10 months. We got here in January of this year...starting February, the government here, which is a leftist government quite like Obama's, has been enacting new laws to limit the freedoms of people. I wish I was exaggerating but for the past 8 months or so, new laws have been introduced every 2 weeks or so.

It started with blocked imports and now people have to get permission to change money to a foreign currency. If you're traveling to another country, you have to ask the government for permission to obtain the currency of that country. And you're only allowed $50 US dollars a day (all inclusive: hotel and food and everything else).

If you oppose what the government is doing, they send the tax agency after you and if they can't convict you on something, a new law is created under which you can be convicted.

People protesting against the government are branded traitors.

16 and 17 year olds are now required to vote in the national elections to gain more popularity. Government agents are sent to schools to brainwash children into almost worshipping the government.

We have a pro government children's group which is fashioned after the Hitler Youth.

Argentina is a country going through change right now.

Do we have more freedoms here than in the UAE, you betcha. But our rights and freedoms are being snatched away at a faster pace than the UAE government did in 6 years that I lived there.

Likewise, things in Cuba were way worse when the so called revolution happened. They slowed down when the dust settled.

And so it is with the UK (mostly England), they are getting worse and soon it may become harder to live there than in the UAE...at least until the dust settles.

I am afraid though that when the dust does settle, the UK would resemble an Islamic state more than a Western one.

And this brings me to this:

I know that I would be willing to fight for two countries in this world because of what they represent and the foundation they are built on: The US and Israel.

There's no doubt about it in my mind.

However, I am not so sure about any European country because I am not sure what they represent or what they stand for anymore.

And that is a depressing thought.

BTW I was in no way implying that Americans and Israelis can't fight for themselves or they need me to fight for them...lest I be misunderstood. ;-)

WOW. You should write an article on Argentina for IBA, Nico.

To me, a lot of those laws you describe sound like things Obama would do.

Maybe I should...I've been really busy lately with my studies and studying Spanish that I haven't really thought about putting in time to write a full article.

But I might want to make time for this one before the elections because whatever I just described, happened in Cristina's (the Argentine president) second term (constitutionally the last term but the constitution is worth less than the toilet paper here).

As soon as she won her re-election, she went crazy with all these changes and the new laws. We're stuck with her till 2015 but our economy may not last until then.

What will Obama do if he is re-elected and has got nothing to lose whatsoever? That's a scary thought.

America is a strong country and not as easy to destroy as Argentina, but its not invincible.

I really hope Obama doesn't win this election. I've said this many times before, America is important not only to Americans but to all freedom loving people around the world.