Islamic Saudi Academy In Virginia: "Kill The Infidels And Take Their Property" 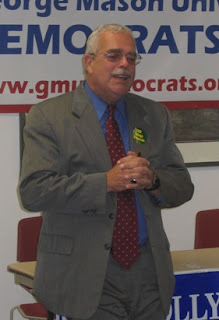 Muslim children are being taught to kill you and take your property, and that message is being paid for by the Saudi Royal Family.
(Photo on right: Gerry Connolly, Chairman of the Fairfax County Board of Supervisors sure does look money, doesn't he? In my opinion, he smells like money too.)

Troubling passages in texts at Va. school
By MATTHEW BARAKAT –

McLEAN, Va. (AP) — Textbooks at a private Islamic school in northern
Virginia teach students that it is permissible for Muslims to kill
adulterers and converts from Islam, according to a federal
investigation released Wednesday.

Other passages in the school’s textbooks state that “the Jews
conspired against Islam and its people” and that Muslims are permitted to take
the lives and property of those deemed “polytheists.”

The passages were found in selected textbooks used during the 2007-08
school year by the Islamic Saudi Academy, which teaches 900 students in grades
K-12 at two campuses in Alexandria and Fairfax and receives much of its funding
from the Saudi government.

The academy has come under scrutiny from critics who allege that it fosters an intolerant brand of
Islam similar to that taught in the conservative Saudi kingdom. In the
review, the panel recommended that the school make all of its textbooks
available to the State Department so changes can be made before the next school
year.

This indoctrination of children has been going on at the Islamic Saudi Academy for many years, and the AP is only now noticing it.

Our fellow Infidel, Always on Watch, attended the May 19th hearing, and reported that,

The Board Chairman also stated that those who voiced concerns about the
school were slandering the school, but that such slander came under the right of
freedom of speech. His tone was that of scolding those who had taken time from
their day to voice their concerns.

So, I wonder what the Chairman Gerry Connolly would have to say about these text books?

One has to wonder what the Saudis do for Gerry Connolly that he loves them so much. What the hell is he doing lecturing those who would be concerned? Of course, any decent American citizen ought to be concerned about the Saudis funding a school here in the United States.

2) Women are not allowed to drive

3) Bibles are not allowed in the country

4) Jews are not allowed in the country

6) Sharia law is the Constitution of the Royal Kingdom

And, that's only the beginning. Saudi Arabia is probably the most medieval country on the face of the Earth. Of course, American citizens would be concerned. We ought to be apalled.

But, the Chairman of the Board of Supervisors scolds our friends?

Fuck him and the camel he rode in on.

Everyone pass this around. I want this info to get out. Gerry Connolly, the Chairman of Board of Supervisors had the nerve to scold American citizens who expressed concern about the Islamic Saudi Academy. In fact, one source told me he called them "bigots."

Just a week or so later, it was found that the Islamic Saudi Academy was, apparently, actively suppressing a report of child molestation:


Follow-up to this posting about the Islamic Saudi Academy, from NBC4 News in Washington, D.C.:

A 5-year old girl told a teacher in mid-May that her father was sexually abusing her, News4's James Adams reported. Two teachers and the principal at the west campus put together a report and forwarded it to the school's director general, Adams said.

According to court documents, the school's director, Adalla Al-Shabnan, did not believe the girl's complaint.

He later told investigators that he recommended psychological counseling for the girl after meeting with her parents.

Virginia law requires abuse allegations to be reported within 72 hours.

On May 23, detectives searched and seized computers, notes and records from the school's Fairfax campus.

According to court documents, Al-Shabnan directed the original report to be deleted from the school's computers.


I wonder what Gerry Connolly, Chairman of the Fairfax County Board of Supervisors thinks about that? We "bigots" want to know.

I also would like to know what motivation Mr. Connolly has for aiding and abetting the Royal Saudi Embassy in the process of sustaining their lease.

Call me crazy, but I smell money. Isn't that money I smell? Anyone else smell money? I'm not sure. But, it smells like money.
Posted by Pastorius at 5:56:00 pm

Pastorius,
Great post! As the saying goes, "A thing of beauty is a joy forever."

Thanks for picking up the ball on this one. I've had lots of woes lately, and just yesterday got my phone and Internet service temporarily restored.

As you know, for YEARS I've been screaming about ISA, alma mater of convicted terrorist Ahmed Abu Ali. I've posted on ISA numerous times: here at IBA, at my site, at my archived site, and at Northern Virginiastan.

Gerry Connolly is now the Democratic nominee for the U.S. House of Representatives, as of the Tuesday, June 10 primary.

I hope that all here will take the time to watch the videotape of the Board hearing. It's a blood boiler and exposes local leaders for the dhimmis they are.

I just hope Gerry Connolly has enough money to fund his campaign.

Connolly is very well funded. Or so I hear.

I wish I could say that was a surprise, but I can't.

By the way, what's that smell?

The stench is indeed green.