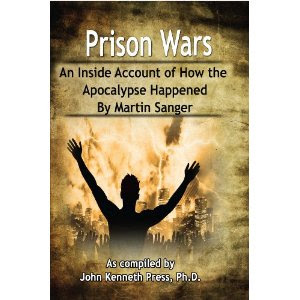 In dramatic fiction Prison Wars illustrates the death of society when it contradicts culturist principles.  Watch as charismatic pop spiritualists become social terrorists.  Thrill as men’s desires drive society off the cliff.  Scream as media and government actively take place in our corruption and end.
Fortune Magazine assigned Martin Sanger to profile entrepreneurs.  But Quentin Longus wasn’t like the other’s he had met.  Quentin’s transformative calm taught Martin to relax.  And this calm allowed him to agree to Quentin’s offer to cover Prison Wars.
Prison Wars games pitted teams of prisoners against each other in battles to the death.  And the ratings reduced every other show to irrelevance. The State said nothing as the television proceeds for Prison Wars helped pay off its debts.
Freddie Jackson became the games’ first criminal star.  His winnings allowed him to spend his life sentence in a private mansion with private guards where he’d broadcast shows and film porn.  His contributions to the movement revolutionized consumerism.
The mad philosopher Les Christiansen also emerged from Prison Wars.  As Quentin’s philosophy coach he took the ethics of Prison Wars and turned them into popular movements for democratic reform.  His wicked plots consciously pushed society to the brink and over.
Attracted by fame, power, and raw lust, Martin Sanger took the job of cultural leader and official publicist for Prison Wars.  Along the way he came to peace with many aspects of his masculine power.  And ultimately Sanger wrote Prison Wars in order that future societies might not follow ours into apocalyptic destruction.
In the year 2023 John Kenneth Press’ investigations led him to a copy of Martin Sanger’s manuscript.   As a culturist and the author of the book culturism, as a proud American, and one who mourned the destruction of Western civilization, he thought it his duty to publish Martin Sanger’s manuscript.
Save Western civilization.  Follow Martin Sanger and Quentin Longus as they embark on a rock star life style that ultimately engulfs all of society in explosive popular mayhem and decadence.  Find out first hand, what it is like to party your soul into oblivion.   Learn of the wages of sin before it is too late for all of us.
Support Culturist John's culturist revolution.  Defeat multiculturalism.
BUY PRISON WARS NOW on Amazon at
http://www.amazon.com/gp/product/097857771X
Posted by Unknown at 12:41:00 pm

I glanced over something about Prison wars on your official website, but I was under the impression that wasn't a work of fiction like this, that it was actually something about life in U.S Prisons. I'm really surprised to see this. I guess I didn't read over it very carefully.

How PoMo of you.

Putting the cover image on the site was a stroke of genius. Thank you!

Damien, this is the opposite of culturism. It is not dry. It is pulp fiction. I've had one friend read it. He actually did it in three days and said he stayed up late to finish it! That made me very proud.

It is, however, a John Press book, so it is a work of political science. And, I think the ultimate message is very un-po-mo. In fact, in one section, I call modern art mover dangerous than fascist art. Hmmn. "Fascists killed men. Modern art kills man."

If that ain't tantalizing, I don't know what would be.

Thanks again for including the cover, John

I would expect that, coming from you, the message would be the opposite of PoMo.

However, the idea of having the book be authored by Martin Sanger (Margaret Sanger's satanic spawn) and edited by one John Press (who is that guy, anyway) is, indeed, very PoMo.

Yes, I remove myself in favor of a fictional character. That is very po-Mo!

But where is the real Johnny P?