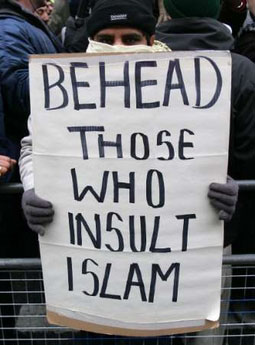 Well, in all fairness, not all Muslims think like that. Unfortunately far too many of them do.

But he did warn the British that we weren't all a bunch of boot licking mealy mouthed sniveling driveling pussies and that if they or anyone else thought they were going to forcibly relieve us of life liberty arms or the pursuit of happiness there were quite a number of bitter clinging patriots just over yonder waiting to really fuck up their plans and ruin their day.

Or something like that. (my daughters love my history stories)

Double ration of rum all around.

The next IBA masthead:

Infidel Bloggers Alliance: The blog that is NOT RUN by a bunch of boot licking mealy mouthed sniveling driveling pussies ...

I like it. lets put it on a bumper sticker too.

I dunno. It's a toss up. I kinda liked a double ration of rum all around :)

Well, the reason I said what I did, is that in this one instance, people critical of us to have a point when they complain about people saying things that make it sound like all people who are Muslims are violent theocratic hate mongers. There are a few genocidal nut jobs that I have come across who think that we should just kill every single Muslim on the planet. In case of paul Revere and the British, I think that the American people understood that he meant that the British Military was coming to attack us, not every single British person anyway.

You mistake my meaning good sir.

It is that we are a peaceable people here. But be warned, if you try to harm us or disarm us we will stand and fight and sell our rights and lives at a very dear price.

Much the way Revere warned that night when he was captured by the lobsterbacks. He told them 500 or more armed patriots (a fine and rousing rabble of farmers and merchants and laborers and otherwise freemen intent on remaining that way) were waiting to block their advance on and protect the armory at Concord.

But did the British take heed?

And thus did they piss on their parade.

The same warning we have for Jihadis or anyone else (Yo! Kin Jong Il! Hugo! Hu Jintao! Pay Attention here!). We'll countenance none of your tomfoolery.

I think get what you're saying.

Just as Revere rode through town and countryside in the middle of the night shouting his fool head off disturbing people in their peaceful slumber or otherwise engagements ("Hurry George! Finish now! Please!" "I can't Martha. I've lost it with all that hollering going on") so, too, are we engaged in trying to awaken people to the threat moving on us and bidding them to attention and action and ready their arms before it's too late.

And just as Revere warned the British not all were asleep and more had been awaken and were ready and waiting so, too, do we warn the Islamist and Jihadis and anyone else that, we won't necessarily fire first, but don't fuck with us.