Palin, the Flotilla, and the L.A. Times Khalidi/Obama Tape 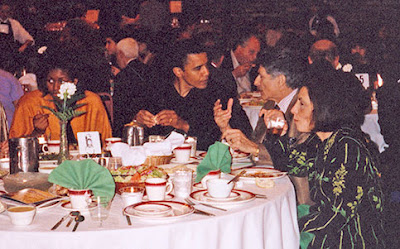 From Roger Simon at PJM:

Over fourteen months ago, I wrote the following on Pajamas Media:


Given the extraordinary sudden turnabout in US policy toward Israel under the Obama Administration, I have become obsessed by the repressed 2003 videotape of Rashid Khalidi and Barack Obama. That tape — or so we are told — is ensconced in a safe at the Los Angeles Times building. In the current situation, its release by the paper is more important and newsworthy than ever.

The Khalidi tape could be of tremendous significance in revealing the provenance of Obama’s views on the Middle East and the degree to which the public was misled on those views during the presidential campaign….

Rashid Khalidi — a Palestinian-American historian known for his strong pro-Palestinian opinions — is currently the Edward Said Professor of Modern Arab Studies at Columbia and director of that university’s Middle East Institute. After Khalidi received this Columbia appointment in 2003, a farewell dinner party was held in his honor in Chicago. A videotape was made of that party where many good things were said about the Palestinian cause and many bad things about Israel. Then Illinois state Sen. Barack Obama was in attendance, as were, some say, William Ayers and Bernadine Dohrn.

Since then my obsession with this hidden tape has, if anything, grown, inspired by Obama’s continuing ambivalence, veering toward contempt, for the state of Israel. Others have recently chimed in on the subject, like Jim Hoft noticing a certain irony in LAT’s behavior spurred by recent events (“L.A. Times Won’t Release Obama-Khalidi Tape But Posts 24,000 Sarah Palin Emails“). And then Stanley Kurtz amplified Hoft with “Release the Redacted Transcript!” Making note that the Times claims to have promised not to release the video itself, Kurtz wrote: “I doubt the L.A. Times will ever release the actual video tape, but I do think there’s a scenario in which a transcript might be produced.”

Perhaps because I live in L.A. and know the LAT well, have written for it on occasion, I am far less optimistic than Stanley that such a revelation would occur. Though better written than the lefty blog, the L.A. Times is barely three degrees to the right of the Daily Kos and many times more stodgy. The Times admits mistakes less often than Markos Moulitsas. And I suspect their editorial board would rather see the return of the McNamara Brothers, who dynamited the Times building in 1910, than do anything that might possibly harm the reelection of Barack Obama.

another photo which will haunt those who view it. . .La Raza alliance with Arafat circa 1980