Islam, Muslims, the Burqa, and Cancer 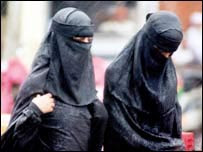 Something pretty important has come to my attention that probably should be discussed among Muslims. The sun. Admittedly, the sun is pretty central in our existence in this world. It has been found that most Americans are deficient in Vitamin D, which is obtained in its natural form from sunshine. Medical science has found that people who are deficient in Vitamin D are more likely to become ill – in the long run, with cancer. In a way, humans are like plants. We will wilt, wither away, and eventually die without attention to certain physical things like adequate sunshine, water, exercise and of course nutrition.
The Muslim community has been very strict and frowning upon those who drink alcohol or smoke. But many public functions feature soda in  place of water. After low levels of sunshine, a high level of sugar in the blood is the second top cause of cancer. Soda in fact actually dehydrates you as it contains salt (sodium). Drinking soda is like drinking sea water in terms of how it replenishes you. It does not.
But getting back to the sunshine issue, how can Muslim women who wear hijab prevent themselves from wilting away from lack of Vitamin D? Fair women need to apply sunscreen to their faces to prevent redness, moles and brown blotches. Some husbands are so “sensitive,” they won’t even let their wives go out wearing sandals. It may be necessary for Islamic scholars to convene to discuss this issue that is causing widespread death in our community, which is the lack of sunshine, whether it’s because of too much computer use or because of women having nowhere to go outside in privacy.

The answer is fairly obvious. Drink lots and lots of soda. It also talks about women going outside in their burqas, there is the other answer, never go out, make sure the curtains at home are drawn at all times, catching those stray sunbeams is the most dangerous of all.