It's a sign of the times we live in that it is, apparently, impossible to find this image on Google.

CAIRO – An Egyptian Christian telecom mogul has angered Islamic hard-liners by posting an online cartoon of Mickey Mouse with a beard and Minnie in a face veil.

The ultraconservative Islamists, known as Salafis, called the cartoon posted by Naguib Sawiris on Twitter a mockery of Islam. They launched an online campaign calling on Muslims in Egypt to boycott Sawiris' mobile phone company Mobinil. Shares of Mobilnil and Orascom Telecom, which Sawiris founded, both fell Monday on the Egyptian stock exchange.

Sawiris, who is also a politician, promotes a secular Egypt. He owns media companies and after Mubarak stepped down on Feb. 11, he launched a political party that calls for separation of state and religion.

After the cartoon posted a few days ago stirred complaints on Twitter, Sawiris tweeted an apology on Friday and claimed he was joking.

"I apologize for those who don't take this as a joke; I just thought it was a funny picture; no disrespect meant. I am sorry," he tweeted.

But new Facebook groups cropped and quickly gained more than 60,000 followers, calling for a boycott of his widely used cell phone company.

Named "We are joking Sawiris," the Facebook group said: "If you are really a Muslim, and you love your religion, boycott his projects. We have to cut out the tongue of any person who attacks our religion."

At least 15 Salafi lawyers have filed lawsuits accusing Sawiris of religious contempt, an official at the prosecutor general office said. The official spoke on condition of anonymity because he was not authorized to speak to the media.

Another Facebook group named "We hate you Mickey Sawiris" depicted the Egyptian businessman as Mickey Mouse. The group's motto is: "No to mockery of Islam."

The cartoons are another source of sectarian tensions, which have already exploded into violence on a number of occasions in the chaotic, post-Mubarak transition.

A Salafi cleric Mazen el-Sersawi appeared on television and scolded Sawiris. "Shame on you," he said.

"How can a man like this make fun of Muslims, in a country on the brink of sectarian discord," he said. "If this is just joking, why don't you depict Mickey Mouse as a monk or a nun?"

This is not the first time Sawiris has provoked criticism with comments about Islam. In 2007, he spoke out against the Islamic veil.

"I am not against veil ... but when I walk in the street, I feel like a foreigner," he said in local media.

In the broad spectrum of Islamic thought, Salafism is on the extreme conservative end. Saudi Arabia's puritanical Wahhabi interpretation is considered its forerunner, and Saudi preachers on satellite TV and the Internet have been key to the spread of Salifism in Egypt.

Salafists are distinguished by the way they dress. In many parts of Cairo, women wear the "niqab," a veil which shows at most the eyes rather than the scarf that covers only the hair. The men grow their beards long and often shave off mustaches, a style said to imitate the Prophet Muhammad.

The cyber campaign against Sawiris showed how uncomfortable his secular campaign has made Islamists. It also could lead to polarization in the streets ahead of crucial parliament elections set for September.

Fuck Islam. And, fuck Google for being afraid of offending Muslims: 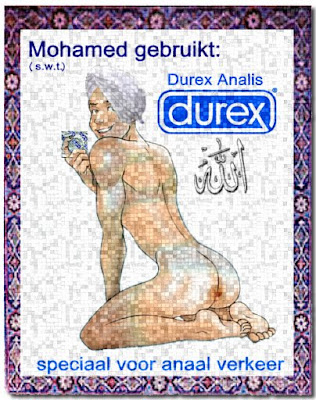 I hope they don't kill this guy.

By the way, if google is not posting the image for fear of offending Muslims, it does seem kind of strange, since I just found dozens of imagines of Muhamood, including the mo toons that Muslim fanatics used as an excuse to riot.

the photos are up along with an image of the "offensive" post. They are rather ugly images

Shut up, you fag.

Bring Me You'r Sisters or you'r Mother And She Will Tell You If Im Fag or Not sisterfucker !
ALLAHU EKBER <3

hey are you pastorious gay go and fuck with yourself you mother fucker .... :D

Im not this boy i mean the first anonymous im the second we are muslims and a muslim protect his identity you sone of a bitch have you understand????