"Lets build A One World Religion: 50 U.S. Churches To Read From The Quran On Sunday 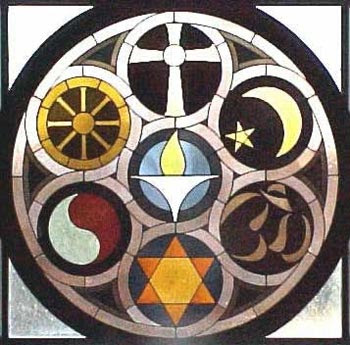 The three main pillars of the "New World Order" that the global elite want to bring about are a one world economy, a one world government and a one world religion. A lot of attention gets paid to the development of the first two pillars, but the third pillar gets very little attention. But the truth is that a one world religion is getting closer than ever.

"Interfaith" conferences and meetings are being held with increasing frequency all over the globe. Major global religious leaders are urging all of us to focus on our "shared" religious traditions. The belief that all religions are equally valid paths to the same destination is being taught in houses of worship and at religious institutions all over the globe.

This "interfaith movement" is being promoted by NGOs, "charitable foundations" and top politicians and it is being backed by big money all over the planet.

Now some U.S. churches are trying to take things to another level. On June 26th, the National Cathedral in Washington D.C. and approximately 50 other churches in 26 U.S. states will publicly read from the Quran during their Sunday worship services.

This is all part of an interfaith project being promoted by the Interfaith Alliance and Human Rights First. The theme of this Sunday is "Faith Shared: Uniting in Prayer and Understanding", and the goal is apparently to show how much Christian churches in the United States respect Islam.The following are some of the other prominent U.S. churches that will be doing Quran readings this Sunday....

*All Saints Church in Pasadena, California

In all, 'churches' in 26 U.S. states will be participating.

But these Quran readings are just supposed to be the beginning of something bigger. The following is from a description of the Quran reading project on the website of Human Rights First....

At its core, this project will bring together Christian, Jewish and Muslim clergy to read from and hear from each other’s sacred texts. In doing so, they will serve as a model for respect and cooperation and create a concrete opportunity to build and strengthen working ties between and among faith communities moving forward.

The truth is that all Americans have the freedom to read the Quran whenever they want. But should Christian churches be reading from it during Sunday worship and should they be seeking to "build and strengthen working ties" with Islamic groups that are seeking to promote the spread of another religion?

Obviously, many Christian leaders are not pleased with this development. Worldview Weekend President Brannon Howse recently made the following comment regarding the reading of the Quran in U.S. churches....

Sadly, this is not a new trend. The truth is that the "interfaith movement" has been building momentum for decades and some of the most prominent religious leaders in the world are involved.For example, the following excerpt from a CNS article talks about a huge "interfaith event" hosted by the Pope when he visited Washington D.C. in 2008....

When Pope Benedict XVI comes to the Pope John Paul II Cultural Center in Washington for an early-evening interfaith meeting April 17 with Buddhists, Hindus, Jews, Muslims and representatives of other religions, space will be at a premium.Many top U.S. Christian leaders have been very involved in the "interfaith movement" as well.

For example, Brian McLaren, one of the top leaders of the emerging church movement, actually celebrated Ramadan back in 2009.

Rick Warren, a member of the Council on Foreign Relations, has been a guest speaker at the national conference of the Islamic Society of North America.

Some time ago, a virtual "who's who" of evangelical Christian leaders that included Rick Warren, Robert Schuller, Brian McLaren, Richard Cizik and Bill Hybels all signed a letter to the Islamic community that was entitled "Loving God And Neighbor Together". This letter made it abundantly clear that these Christians leaders consider Allah and the Christian God to be the same entity.

Let's take a quick look at a couple of quotes from the letter....

Before we “shake your hand” in responding to your letter, we ask forgiveness of the All-Merciful One.

In Islam, "the All-Merciful One" is one of the key names for Allah.

So in this letter the Christian leaders were praying to Allah and were asking for his forgiveness and were acknowledging that he is God.

Here is another quote from the letter....

If we fail to make every effort to make peace and come together in harmony you correctly remind us that “our eternal souls” are at stake as well.

Very strangely, in the letter the Christian leaders claim that their "eternal souls" are at stake if they do not make every effort to "come together in harmony" with the Islamic community.

Once again, people in America are free to believe whatever they want, but Christian leaders should not be trying to develop religious ties with Islam.

The truth is that Jesus would not have wanted anything to do with this one world religion that the New World Order is trying to bring in.

In John 14:6, Jesus made the following statement.....I am the way, the truth, and the life: no man cometh unto the Father, but by me.

.In fact, the very first two of the Ten Commandments are about how no other gods should ever be worshipped except for the one true God. In Exodus 20:3-6 it says the following....

Thou shalt have no other gods before me. Thou shalt not make unto thee any graven image, or any likeness of any thing that is in heaven above, or that is in the earth beneath, or that is in the water under the earth. Thou shalt not bow down thyself to them, nor serve them: for I the LORD thy God am a jealous God, visiting the iniquity of the fathers upon the children unto the third and fourth generation of them that hate me; And shewing mercy unto thousands of them that love me, and keep my commandments.

But today everybody wants to be "politically correct".That is especially true of religious leaders.

But this is exactly what the global elite want. They want everyone herded into one giant "global religion" that they will be able to take charge of and control.Of course once the global religion is established, they won't have much use for the real Jesus Christ or for the Bible.

Even if you are not a Christian, you should be deeply troubled by these developments.

Hmmmm......MFS : In 2004 Vatican instruction Redemptionis Sacramentum forbade such readings. The document states that “it is strictly to be considered an abuse to introduce into the celebration of Holy Mass elements that are contrary to the prescriptions of the liturgical books and taken from the rites of other religions.” This just confirms what i always said it’s against the first commandment “You shall have no other Gods before me”.

At All Saints Episcopal Church in Pasadena, California, Maher Hathout, Senior Advisor of the Muslim Publics Affairs Council is PREACHING from the pulpit at 9:00 and 11:15 a.m.

Here's some information on Maher Hathout from the Investigative Project on Terrorism:

Maher Hathout is the Senior Advisor and one of the founders of the Muslim Public Affairs Council (MPAC).

Hathout delivered a lecture at the State Department in 1997 in which he discussed emerging Islamic trends. Among the reformists he cited were Hassan al-Banna, Rashid Ghannoushi and Hassan al-Turabi. They advocated a pluralistic society that would work for peace and justice for all, he said, but they been ignored, despite the fact that ‘they represent the masses and speak their language.'"[1]
These examples of people Hathout sees as "reformists" are, in reality, extremists.

Hassan al Banna founded the Muslim Brotherhood, a fundamentalist Sunni movement dedicated to resurrecting an Islamic Caliphate. According to al-Banna, "It is the nature of Islam to dominate, not to be dominated, to impose its law on all nations and to extend its power to the entire planet."[2] Al-Banna gave the group the motto it still uses today: "God is our purpose, the Prophet our leader, the Quran our constitution, jihad our way and dying for Allah our supreme objective."[3] Hamas and Al Qaeda have roots in the Muslim Brotherhood[4] while Palestinian Islamic Jihad was founded by breakaway Brotherhood members.[5]
Rashid Al Ghannoushi was the head of Tunisia's banned Islamic fundamentalist Al-Nahda Party and was convicted by a Tunisian court of responsibility for a bomb blast that blew the foot off a British tourist. [6]
Hasan al-Turabi was the head of the National Islamic Front, which the U.S. government has condemned for supporting terrorism, launching a genocidal war in southern Sudan, and for continued human rights violations. Turabi also gave Osama bin Laden sanctuary in Sudan. [7]

Hathout has justified Hizballah violence, saying in 1998: "The whole country keeps condemning Hizballah; I disagree with them on other issues, but on the issue of fighting to liberate their land and attacking only armed forces, this is legitimate, this is an American value - freedom and liberty."[8]

In May 2001, Hathout said "… the United States is also under Israeli occupation… [and] we have a Congress that beats the Knesset in being pro-Zionist."[9]

Then, days after the 9/11 attacks, Hathout encouraged a conspiracy theory that the hijackers' identities were being falsified. During a chat at the IslamOnline website, a writer claimed one hijacker was alive and well while a second had been dead for more than a year. Hathout praised the writer for "providing unique information that needs to be more known and verified. Please call the Minaret magazine…"[10]

Click here to see Hathout on the subject of Israel.

Read more at: http://www.investigativeproject.org/profile/109
Posted by Pastorius at 3:18:00 pm

There are ways in which Christians can accommodate the interfaith message, be true to the highest aims of both Christianity and Islam. To live for Christ and help as many Muslims as possible to die for Allah.

I also sincerely doubt that any of these politically correct churches will read the parts of the Koran that specifically tell Muslims, not to befriend Jews and Christians, how Islam must dominate the world by force if need be, and how people who leave Islam must die. I bet they'll ignore all that.

I wonder if they know the Koranic verse that says, "They do blaspheme who say: Allah is Christ the son of Mary." Qur'an 005.072 or "O People of the Scripture! Do not exaggerate in your religion nor utter aught concerning Allah save the truth. The Messiah, Jesus son of Mary, was only a messenger of Allah, and His word which He conveyed unto Mary, and a spirit from Him. So believe in Allah and His messengers, and say not "Three" - Cease! (it is) better for you! - Allah is only One Allah. Far is it removed from His Transcendent Majesty that He should have a son." Qur’an 4:171


I visited the Baptist church in Jerusalem. They read from the Koran in an “inter-faith" attempt. I was disgusted and never went back. They know not what they do.

These churches are no longer the bride of Christ. Instead, they are whores.

Well said, Always. What's wrong with these churches--don't they have any self respect.?

the Danish Lutherans are standing up to islam:
http://carolmsblog.blogspot.com/2011/06/danish-lutheran-church-takes-stand.html
C-CS

Jesus is the only beggotten Son of God. While Mohammed is a false prophet who claims he is greater than Jesus.