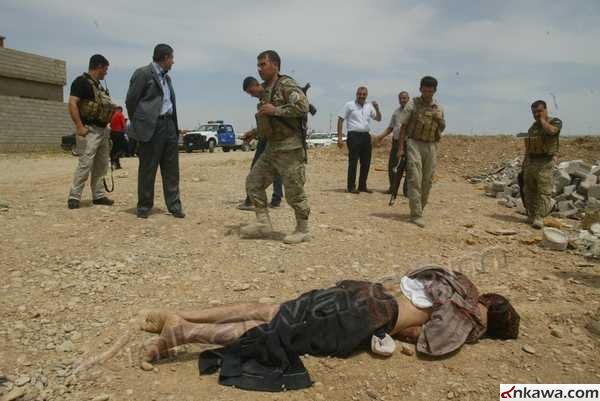 His body was mutilated. His head was nearly severed off. He was tortured before he was executed, according to the Kirkuk police. His eyes were gouged out, his ears were cut off and his faced was skinned. There also were signs of dog bites on the body.
Mr. Jacob is survived by his wife and three children.
He was an Assyrian construction worker.

His name was Ashur Yacob Issa and he had been kidnapped. His family was asked for a $61.500 ransom, a sum they couldn't pay at all.
Photo found at AINA.org.
Posted by Claudia at 5:14:00 pm

Pretty freaking awesome huh? Don't we just have so much more in common with these faithful filth than most people ever realize, Mr. useful idiot former M.E. U.S. Ambassador?

America will never be at war with these poor compassion-challenged demons from hell, right, Obi Golf?

What a fucking world.

Shame on us, humanity, for not demanding immediate clarity and resolve on this and then putting a stop to it.

Be it resolved, Western Civilization, was Mahomet an evil man or a perfect man?

Be it resolved, Western Civilization, does following, emulating, worshiping, or advocating an ideology created by an evil man not render one evil in one's own right?

Be it resolved, Western Civilization, are we going to continue to tolerate, co-mingle with, and ultimately be enslaved by evil people?

Not much has changed since the Crusades or the time of the Barbary pirates.welcome to A.D. 620?

It's barbaric, yeah. But how many MSM have published this? I haven't even have known it, if AINA.org and others sites reporting on persecution of Christians wouldn't have reported on this.

So, yeah, welcome to A.D. 620, with weapons of the XXIth century and using Internet and Iphones, so the control over the citizens is much greater.