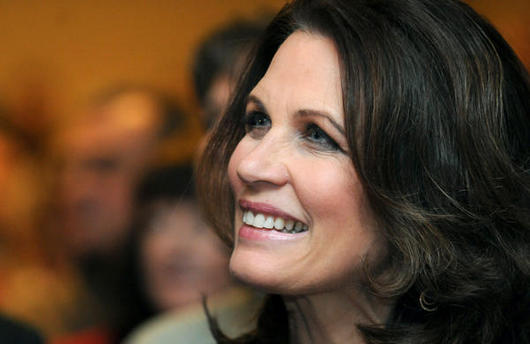 Michele Bachmann is quickly becoming one of my heroes with this story.

From the SC Times:


U.S. Rep. Michele Bachmann is asking how a top aide to Secretary of State Hillary Clinton got security clearance given what Bachmann describes as the aide’s family ties to the Muslim Brotherhood movement.
Bachmann also says an investigation of “potential Muslim Brotherhood infiltration” of President Barack Obama’s administration is needed because of interactions between federal agencies and what she calls U.S. front groups for the Muslim Brotherhood, an international Islamist group that recently came to power in Egypt.
The comments come in Bachmann’s new response to U.S. Rep. Keith Ellison’s call for Bachmann to back up the information on which she based a request for federal investigations into whether the Muslim Brotherhood has infiltrated the U.S. government.
Ellison, DFL-Minneapolis, wrote Bachmann and four other lawmakers last week asking them to name their sources for similar claims on which they based their June 13 call for the investigation.
Bachmann, R-Stillwater, responded Friday with a 16-page, 59-footnote letter to Ellison. The letter contains additional details about the June 13 allegations made by Bachmann and Reps. Trent Franks, R-Ariz., Louie Gohmert, R-Texas, Thomas Rooney, R-Fla., and Lynn Westmoreland, R-Ga.
Bachmann’s letter also raises new questions about the Obama administration’s actions since that call for an investigation.
One of Bachmann’s June 13 letters singles out Huma Abedin, a deputy chief of staff to Secretary of State Hillary Clinton and wife of former New York congressman Anthony Weiner.
Bachmann’s letter says three members of Abedin’s family have had ties to the Muslim Brotherhood, notes that her job affords her routine access to Clinton, and says the State Department has taken recent actions “that have been enormously favorable to the Muslim Brotherhood and its interests.”
Ellison, DFL-Minneapolis, last week asked Bachmann to substantiate what he described as Bachmann’s suggestion that Abedin “may be working on the (Brotherhood’s) behalf.”
Go read the whole thing.
Posted by Pastorius at 2:03:00 am

The woman has what everybody else seems to lack in Congress: honor, a sense of duty, and a great foresight. She's is aware she will go down in history not as a failed presidential candidate, but as the one member of Congress, a woman, who faced what nobody else dared approach.

I admire her! But can you imagine how much more powerful this letter would have been if coming from a Democrat, or even better, a group of Democrats? I can't believe they have all succumb to unspeakable levels of treason,but how can anybody not know who Huma Abedin is?

They seem to be unaware that they will all go down in history (if there is still one to be written)as traitors, because they cannot be unaware of what's happening.

We still have war heroes in Congress, men who saw men under their own command die for a cause they believed in, and even if they did not, they swore to defend. Where are the Webbs, or men of integrity like senator Lieberman? They are members of a Congress that will go down in shame for not defending the very principles they swore to uphold. I wish they realized they can still be part of our cadre of American heroes, instead of being labeled as a bunch of Benedit Arnolds.

Republicans can turn blue speaking the truth, but they will always b suspect of acting out of partisanship.

Don't Democrat senators and representatives realize they are the ones to bring up the eligibility issue? What r they waiting for? Don't they realize that the entire republic is being compromised, and not just the party? What's wrong with these people???

Sorry. This ended up being a rant, which was not the intended purpose. But there are things I cannot understand ...

Like the idea of taking the Bridge at Arnhem, too much too soon fails.

Just expose the Ikwhan. That would be bold enough. The rest will take care of itself.

Or better still, make public the FBI investigation over the failures to separate Nidal Hassan from the crowd.