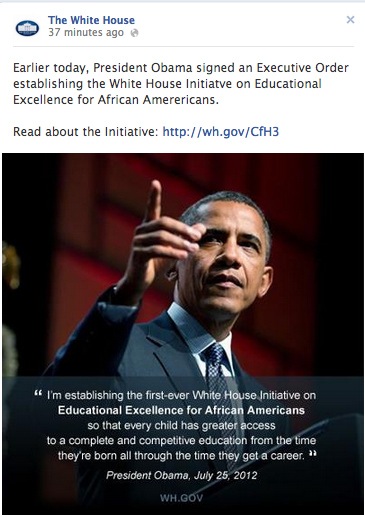 
President Barack Obama is backing a controversial campaign by progressives to regulate schools’ disciplinary actions so that members of major racial and ethnic groups are penalized at equal rates, regardless of individuals’ behavior.

His July 26 executive order established a government panel to promote “a positive school climate that does not rely on methods that result in disparate use of disciplinary tools.”

“What this means is that whites and Asians will get suspended for things that blacks don’t get suspended for,” because school officials will try to level punishments despite groups’ different infraction rates, predicted Hans Bader, a counsel at the Competitive Enterprise Institute. Bader is a former official in the Education Department’s Office for Civil Rights, and has sued and represented school districts and colleges in civil-rights cases.

Labels: Allah Is Gay, Obama is a racist, Obama is not a real Black Man, Obama is trying to make up for his lack of authenticity as a black man by enacting policies that help black thugs, raised by white people

JUSTICE FOR OBAMA AND HOLDER MEANS JUST US BLACK PEOPLE,

This guys pulling out ALL the stops. Unfuckingbelievable!

1) He knows he can't win and doesn't care

4) He's off his fuckin' rocker on coke

I'd call even money on any one of these scenarios

Pretty soon we're gonna have Blacks at Harvard who can't count past twenty.

I may be mistaken, but by 2008 race was no longer an issue in America. Maybe there were some pockets of racists and haters, but in general I believe racism was a thing of the past.

I can't believe my eyes! But here it is.

MR,
He's off his fuckin' rocker on coke

You know that I'll put my money on that one. He is into the cocaine-megalomania phase. I'm convinced of it!

How about the 'Original American Immigrants' who are unemployed and on foodstamps?

By the way did anyone notice how the White House spells "Americans"?

Obama demonstrates the quality of the American educational system and the power of the teachers' union with this new ad emanating from the geniuses at White House:

This is actually funny.

This is Plessy vs Ferguson.

I want my dept of Bokononist Education. Also my wife wants a dept of Irish Education. Will we have one dept of Gay education> or will we need a Homosexual, a Lesbian, and a transgendered dept.

Who will be qualified/favored to be hired for this new dept?

We ready for that island yet, people?

It's much worse then that. You can read it on the WH web site. It's all on how they implement it. They could take money out of mixed schools and give it to black schools. It also effects private and parochial schools. It expands the Department of Education.

This policy will cause animosity between the races. When a black child gets away with what the white child gets punished for it will be worse on the black child. It will keep racism alive and it will feed into it. That is what community organizers want. If it wasn't for racism they would be out of a job. He's just making the job bigger. He is screwing blacks over and they think they won the lottery.