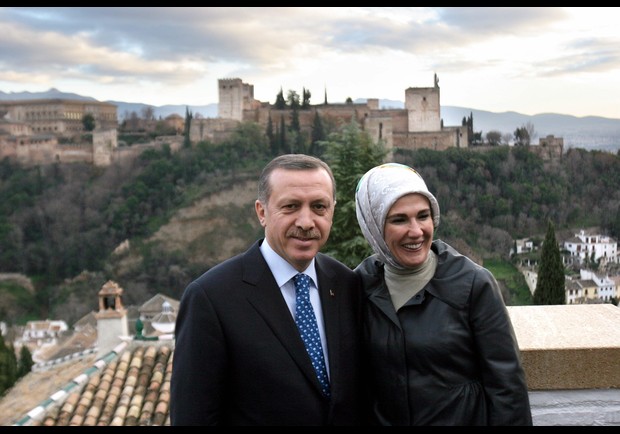 Erdogan pictured with his scuzzy wife

Remember, Erdogan is one of Obama's five best friends among world leaders. He even went so far as to seek Erdogan's advice on raising Sasha and Malia.

In the same period the amount of public schools has remained at 32,000 while the number of mosques has jumped from 76,000 to 93,000. Turkey’s secular opposition has accused Erdogan of having a ”secret plan” to re-Islamisize the nation.

Erdogan recently announced the construction of a new mega-mosque in Istanbul which will ”be seen from every corner of the Bosphorus” and will have the tallest minarets in the world.

“Minarets are our bayonets, the domes our helmets, the mosques our barracks, and the believers our army.”

Well at least he's a man of his word.
Reminds me of his BFF: "If the political winds change, i will stand with the Muslims"

“Thank God Almighty,” said Mr. Erdogan in 1994, when he was the mayor of Istanbul. “I am a servant of Shariah.”

I guarantee you a Pacifist and a Leftist would tell you that quote is exemplary of the fact that Erdogan does not believe in violence.