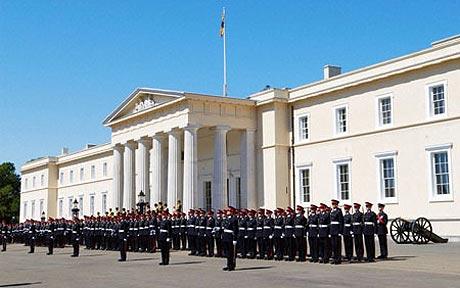 "What's your Jihad" - Outrage as Britain’s Sandhurst military academy renames hall after Bahraini king.(RT).Britain’s Sandhurst military academy is renaming a hall commemorating those who died in a major World War I battle. The building will be renamed for the king of Bahrain, after the ruler donated £3 million to refurbish it.
The hall will soon bear the name of King Hamad, instead of Mons, a battle that took place in Belgium in which 1,600 UK soldiers died; the 100th anniversary of the battle will take place soon.
The Bahraini ruler gave millions to , the Telegraph reported.
The military academy, located in Surrey also received a £15-million donation from the United Arab Emirates to build an accommodation block, which will be named after the UAE’s founding father, the late Sheikh Zayed bin Sultan Al Nahyan.
Mons Hall is set to reopen next month, and King Hamad has been invited to attend the ceremony. A plaque will be unveiled with the inscription: ‘King Hamad Hall. This building, the former Mons Hall, was refurbished in 2013 with a generous gift from the Kingdom of Bahrain.’

Critics claimed the Gulf states, which have been accused of severe human rights abuses, are essentially ‘buying silence.’ Those against the move also point out that the British Army is ‘betraying its dead.’

“There’s something deeply ironic in renaming a hall that was in memory of soldiers who died in a tragic battle in the First World War in honor of a king who is routinely committing human rights abuses,” Labor MP Jeremy Corbyn told British media.
“To change the name of something which commemorates a very tragic episode in British military history, simply because they’re getting a sum of money from a rather dubious source, is appalling,”
said Andy Slaughter, a Labor MP who is chair of the Commons all-party ‘Democracy In Bahrain’ group.
“It reflects the appalling double standards the British Government and institutions have in relation to the Bahraini regime, which is guilty of all sorts of human rights abuses and fundamentally undemocratic."
The online community reacted angrily to the move as well. “I doubt UK will condemn human rights abuses committed by allies whose leaders indirectly fund UK armed forces,” and "Sandhurst endorses mass torturing, child-murdering, iron-fisted dictator" are among the messages posted on Twitter in response to the name change.
Bahrain, home to the US Navy’s Fifth Fleet, has come under fire from human rights organizations such as Amnesty International, which criticized the regime for its violent crackdown on protesters. Tear gas, stun grenades, rubber bullets and even live ammunition have been fired on demonstrators, the Amnesty International said in its latest reports on Bahrain.
Amnesty International has criticized the US and UK for refusing to condemn human rights violations committed by their ally Bahrain.