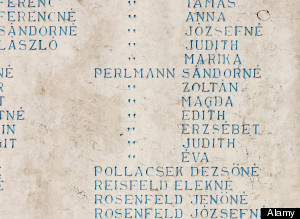 Europe has not fundamentally changed since it went on it's Jew-killing binge. The only difference is, now, they believe they have found someone else (Muslims) to do their dirty work for them.


By Stefan J. Bos, Chief International Correspondent BosNewsLife reporting from Budapest, Hungary
BUDAPEST, HUNGARY (BosNewsLife)-- There was an outcry in Hungary on Wednesday, February 20, over revelations that the country's largest university has been involved in compiling lists of presumed Jewish students at a time of growing antisemitism in this nation of some 10 million people.

The files were compiled annually on freshmen by the student council of the Eötvös Loránd University (ELTE), according to a list obtained by Hungarian television network ATV and seen by BosNewsLife.

Referring to Jewish origins, the 2009 list shows the letters I of the Hungarian word Igen ("Yes") and N for Nem ("No").

Known as the 'numerus clausus law' it limited the number of Jewish students in universities, prompting intellectuals to emigrate, including scientist Edward Teller who left Hungary in 1933.

Critics say the legislation contributed to an atmosphere of hatred in Hungary, which eventually became a close ally of Nazi Germany during World War Two, when 600,000 Hungarian Jews were killed.

It was not immediately clear how the ELTE lists would be used, but the student council that compiled them has ties to the influential far-right Movement For a Better Hungary (Jobbik) party, investigators said.

Recently, a prominent legislator of Jobbik suggested to draw up lists of Jews "who pose a "national security risk".

Jobbik's Marton Gyöngyösi said the lists were needed following the brief conflict in Gaza and should include members of parliament.

"I know how many people with Hungarian ancestry live in Israel, and how many Israeli Jews live in Hungary," he told parliament in November. "I think such a conflict makes it timely to tally up people of Jewish ancestry who live here, especially in the Hungarian Parliament and the Hungarian government, who, indeed, pose a national security risk to Hungary."

The Action and Protection Foundation -- a new Jewish watchdog on anti-Semitism in Hungary -- said it was concerned about reports that lists are already compiled at ELTE university over a period of at least six years.
Posted by Pastorius at 1:33:00 pm

I have always been a supporter of Israel, but you know, if their jackwad relatives here keep voting progressive, I am about to write them off...and just figure we will be fighting this war on our own.

It does not make it easier to support Israel, and oppose anti-Semitism, when the majority of American Jews vote to sustain the Left-dominated system that nurtures the problems in the Middle East.

That being said, when Bush was in office, he did not truly help Israel either, nor did he do anything to stem the rising tide of Jihad.

The net effect of the Bush Presidency was to turn Afghanistan and Iraq over to organized, professional Jihad-supporting governments. We gained nothing. In fact, given that the Iraqi government is Islamist in nature, we could even make a case that we lost. Hussein was not an Islamist.

Since Obama has taken office, he has added another five or six nations to that list. He has accelerated the Jihad. But Bush helped it too.

I can not actually think of a President who has done anything to push it back, except MAYBE Ronald Reagan. But, of course, he hightailed it out of Lebanon, given credence to the "America is a paper tiger" assertion of Osama Bin Laden.

The MOST ironic part of all this, is that now that horsemeat has been found in the beef supply of the EU, and companies right up to Nestle Foods have found it in their prepared products for sale in groceries, triggering massive recalls ... YOU CANNOT FIND KOSHER MEAT ANYWHERE, BECAUSE ALL THE EUROS TRUST IT TO BE WHAT IT SAYS IT IS, AND IT HAS FLOWN OUT OF THE KOSHER BUTCHER SHOPS

Euros running to the Jews to save their asses.