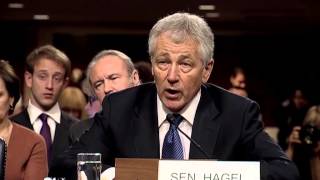 I think this guy's bought and paid for.

Documents obtained by The Daily Caller show that staffers for then-Sen. Chuck Hagel met repeatedly with a controversial pro-Iran lobby group, and some met with the organization’s president.

Hagel is President Barack Obama’s choice to be the next secretary of defense. Arizona Sen. John McCain and other Republicans have conceded that a vote — and likely confirmation — will take place during the week of Feb. 25.

Iranian state-run media have referred to the National Iranian-American Council (NIAC) since at least 2006 as “Iran’s lobby” in the U.S.

It portrays itself in the media as an independent group of Iranian expatriates. But Sam Nunberg, director of the Legal Project at the Middle East Forum project, describes the NIAC as an Iranian “front group.”