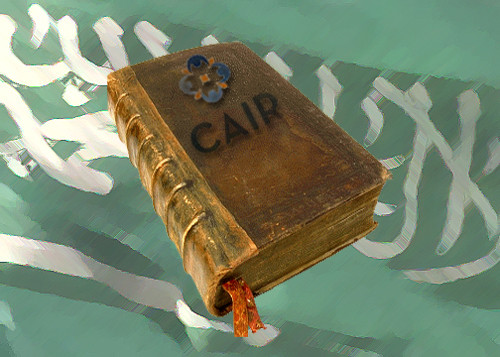 CAIR is so fucking MODERATE:

Dawud Walid, director of CAIR’s Michigan chapter, lectured area youth on Monday about his belief that FBI agents are waiting to set them up through informants. He wants the message to reach a broader audience, posting the audio online and promoting it on his Twitter feed.

Noting the 48th anniversary of Malcolm X’s assassination this week, Walid told the youth audience that history is riddled with spies who betray their own, from Malcolm X to the Islamic prophet Mohammed’s companions, to Judas among Jesus’ apostles. [...]

“Have you all heard of al-Shabaab?” he asked. “Shabaab literally means ‘youth’ in Arabic, as-Shabaab al-Muslimeen is a group in Somalia that’s been involved in a lot of fighting and our government calls them a terrorist organization.”

Walid offered no warning about online content glorifying violent jihad, be it from al-Shabaab or in videos from American-born al-Qaida cleric Anwar al-Awlaki. Though he was killed in a 2011 drone strike, Awlaki’s online sermons continue to influence would-be terrorists. Walid’s speech made no attempt to tell the youngsters why such a message was wrong and should be shunned.