With a hat tip to Randy's Roundtable for the graphic below: 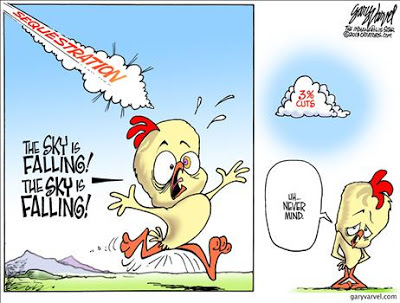 
In fact, the final deal reached between Vice President Biden and Senate Minority Leader Mitch McConnell (R-Ky.) in 2011 included an agreement that there would be no tax increases in the sequester in exchange for what the president was insisting on: an agreement that the nation’s debt ceiling would be increased for 18 months, so Obama would not have to go through another such negotiation in 2012, when he was running for reelection.

So when the president asks that a substitute for the sequester include not just spending cuts but also new revenue, he is moving the goal posts. His call for a balanced approach is reasonable, and he makes a strong case that those in the top income brackets could and should pay more. But that was not the deal he made.

What is the motive behind the sequestration-related demonization of the GOP? The 2014 elections?
Posted by Always On Watch at 1:21:00 pm

The GOP is being set up. If the hold onto the house in 2014 it will be a miracle.