The New Sultan of Swing

I bring you a Public Service Announcement from One Bad-Ass Uppity Apostate Woman. All I can say about her is DAYAMN! This interview is so meaty and full of quotable nourishment that Wafa may sit back and belch, with satisfaction, Mohammed's vile and greasy essence and laugh. She can also flatulate his essence quite well. So VERRRRRRY fatwa worthy is her commentary: Let us just savor the recipe of putdown pudding, shall we? Pick your teeth with joy my fellow infidelicadoes.

This was from Al Hayat Television in Cyprus. Al Hayat means The Life. In modern Arabic the New Testament is referred to as Al Injeel w'al Kitab al Hayat. The Gospel and the Book of Life. So I am betting this is from a Christian television station in Cyprus.

Wafa Sultan: When I examined the Koran, the hadith, and the Islamic books under a microscope, I came to the absolute conviction that it is impossible – impossible! – for any human being to read the biography of Muhammad and believe in it, and yet emerge a psychologically and mentally healthy person.

Do you remember the way that [the Prophet Muhammad] killed ‘Asmaa bint Marwan? His followers tore her body apart limb from limb, while she was breastfeeding her child. When they returned to him shouting “Allah Akbar,” he said: “No two goats will lock horns over her.” As you know, goals lock horns over the most inconsequential thing. For Muhammad, however, the killing of a woman while breastfeeding was too trivial a reason for goats “to lock horns over.” Is this a prophet of God?

It makes me very sad that Al-Jazeera TV allows an insane and terroristic creature like Al-Qaradhawi to use it as a medium for the spreading of his poisons, his terroristic fatwas, and his babbling. The words he used against me incited many young Muslims – who have been brainwashed and blindfolded, and who have been programmed to hate – to rain curses and threats upon me, right after the show in which he discussed my appearance on Al-Jazeera.

I do not view Islam as a religion – according to my notion of religion. Islam is a political doctrine, which imposes itself by force. Any doctrine whatsoever that calls to kill those who do not believe in it is not a religion. It is a totalitarian doctrine that imposes itself by force. When I read, for example, the verse: “The adulterer and the adulteress – flog each of them with a hundred stripes, and do not let compassion for them move you” - I do not discern any spirituality in this verse. Whena certain faith manages to can strip its believers of their last grain of compassion, it strips them of their spirituality as well.

Jesus Christ is the symbol of peace. He did not carry a sword, chop off heads, or accuse anybody of heresy. The problem in Islam is that if we were to act similarly to the Christians of the Middle Ages, and we were to model our lives after the life, actions, and words of Muhammad, we would find ourselves in an even bigger mess than the one we are in, and we would end up like Osama Bin Laden and his ilk. Read about the life of Muhammad. What do you find there? Nothing but his raids and his wives, in addition to his hadiths, some of which make you shudder. I shudder when I hear the hadith: “A woman’s paradise is under her husband’s foot.”

The Islamic teachings have become dreadful in the skulls of the Muslims. I see no alternative but to open up these skulls, and to clean the life-threatening cancerous cells in these brains.

When the Syrian people swarmed the Danish embassy and burned it down, it burned my heart too. Why? The Syrian people is dying of hunger. The Syrians, despite their [ancient] civilization, chase after their daily bread. Why don’t they swarm the palace of their president, who has 40 billion dollars in European bank accounts, and burn down the palace, along with its occupant? They swarmed the Danish embassy, giving the West the wrong image of the moral and civilized Syrian people. Therefore, I describe their conduct as barbaric and backward.

The Israeli-Palestinian conflict is a religious conflict. I support the Palestinian cause. I support the Palestinian children. I lose sleep over the suffering of Palestinian women. I cannot even step on an ant, so how could I possibly be against them? This is inconceivable. This is a political conflict, and they should ask their leaders about what they have done to resolve the problem. But the problem is rooted in religion. A week or two ago, I read a short story in an Islamic book, according to which Muhammad was walking with some of his followers when they heard a commotion. They asked him: “What is this, Messenger of Allah?” He said: “These are the Jews being tormented in the grave.” Regardless of the conflicts Muhammad had with the Jews back then, this statement indicates that the graves of their ancestors were in Saudi Arabia, correct?

Wafa Sultan: They are people of this region, as is evident from the Islamic books and the Koran itself.

The problem with the Muslims is that they do not distinguish between their prophet and their own noses. When you criticize Muhammad, his actions, and his life, it is as if you chopped off their noses.

The Spirit of Asma Bint Warwan lives on! 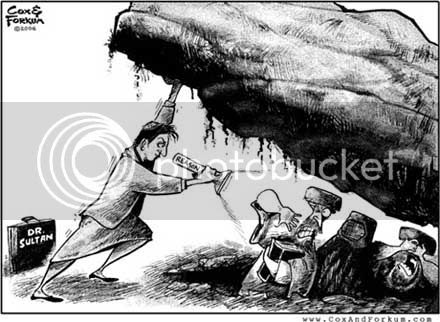 Wafa Sultan shines the light of truth on Islam
Posted by Mother Effingby at 1:30:00 am

Wafa Sultan is a very brilliant speaker. I can't say I agree with her 100% but for the most part she is right on the money. The only problem with her idea that we should try to change them by penetrating their minds is this. How do you change the mind of someone who is convinced your evil for simply not agree with them? If our relatively civilized behavior won't change their views of us, its hard to imagine what could. We have never attacked them unprovoked, yet they attack us. We have sometimes helped Muslims in need, but they are so hate filled and perverted by a sick ideology, that they still see us as the root of all evil. The only thing that we can do to make them change is if we have the stomach to do what is necessary to force unconditional surrender upon them and make them accept the seperation of Mosque and State. But that will only happen if we are incredibly tough and incredibly ruthless.

We are also going to have to stop with the politically correct nonsense.

Terrorists can be turned into model citizens by the use of compassionate counselling, crystal healing and aromotherapy.

Islamic extremists could escape prosecution and instead receive therapy and counselling under new Government plans to “deradicalise” religious fanatics.
The Home Office is to announce an extra £12.5 million to support new initiatives to try to stop extremism spreading.

The central element of the Home Office plan is a new national “deradicalisation” programme that would persuade converts to violent and extremist causes to change their views.

Controversially, the new plan makes clear that people who fall under the influence of violent organisations will not automatically face prosecution.

Instead, the presumption should be that some such individuals would face therapy and counselling from community groups instead of criminal charges.”

And do you actually believe what you just wrote?