Creator of “Everyone Draw Mohammed Day” Now Says She Wants Nothing to do With it, Declares Herself an “Idiot”

Way to stand up for what you believe in….

As South Park’s Sheila Broflovski would say: “What, What, WHAT?”

The outcry from Comedy Central’s decision to censor an episode of SouthPark with depictions of Muhammad last week led a cartoonist and a Facebook user to fight back. That is until they realized it might be controversial, apparently.

In declaring May 20th to be “Everybody Draw Muhammad Day,” Seattle artist Molly Norris created a poster-like cartoon showing many objects — from a cup of coffee to a box of pasta to a tomato — all claiming to be the likeness of Muhammad.

Such depictions are radioactive as many Muslims believe that Islamic teachings forbid showing images of Muhammad.

“I am Mohammed and I taste good,” says the pasta box in the cartoon. On top of the cartoon images (but no longer on her website) was an announcement explaining the rationale behind the event.

“In light of the recent veiled (ha!) threats aimed at the creators of the television show South Park (for depicting Mohammed in a bear suit) by bloggers on Revolution Muslim’s website, we hereby deemed May 20, 2010 as the first annual “Everybody Draw Mohammed Day,” the original artwork reads.

On Friday, Norris told a radio talk show host in Seattle that she came up with the idea because “as a cartoonist, I just felt so much passion about what had happened…” noting that “it’s a cartoonist’s job to be non-PC.”

That passion, it appears, has lessened. And fast.

Her stark website todayreads: “”I am NOT involved in “Everybody Draw Mohammd [sic] Day!”

“I made a cartoon that went viral and I am not going with it. Many other folks have used my cartoon to start sites, etc. Please go to them as I am a private person who draws stuff,” she writes.

It went viral, however, because she was the one who passed it around. Sending it to people like Dan Savage, a popular Seattle-based blogger and nationally syndicated sex advice columnist.

Once it became a national story she reeled back, asking Savage — in an email he provided to The Ticket — if he would “be kind enough to switch out my poster” with another one — a much tamer version which has no images attributed to Muhammad.

“I am sort of freaked out about my name/image being all over the place,” her e-mail reads.

He didn’t change it, nor did he post the tamer version. Besides, after Savage posted it, many other sites picked it up including The Atlantic and Reason.

When asked about her change of heart, Norris told The Ticket that she didn’t intend for the cartoon “to go viral.”

Then why did she send the cartoon to the media in the first place? ”Because I’m an idiot,” Norris replied.

“This particular cartoon of a ‘poster’ seems to have struck a gigantic nerve, something I was totally unprepared for,” she said.

She doesn’t appear to be alone. The creator of a Facebook page dedicated to the day has bowed out as well. Jon Wellington told the Washington Post(before abandoning ship) that he created the page because he “loved [Norris's] creative approach to the whole thing — whimsical and nonjudgmental.”

WE DON'T NEED HER, DO WE, MY FRIENDS? 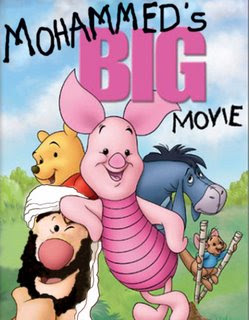 I declare September 11 of every year to be "Wipe Your Ass with the Koran Day." Of course, September 10 is always "Pulled Pork and Malt liquor Day", just to make it really worth while.

Wow, that ought to do the trick.

And, it provides a way to actually flush the Krayon, even if only a page at a time.

Word on newsradio is that Phoenix was trashed today by pro-illegal-immigrant demonstrators. Most popular medium of mayhem said to have been refried beans.

Oh, that'll make us all want them here more, huh?

For those of us who don't have access to face book, would you mind copying some of the text re. the other drop-out?