Thanks to Will for sending this to us.


Via Dan Savage's blog at The Stranger, some clever chappie (I don't know who) has declared May 20, 2010 "Everybody Draw Mohammad Day," in support of Matt Stone and Trey Parker and in opposition to religious thuggery. Why May 20? I haven't a clue, though it could have something to do with Otto ascending the throne of Greece. Or, more likely, King Sancho IV of Castile's founding of the Study of General Schools of Alcalá.

I will be employing my tremendous skill as an illustrator, of course, and expect that my colleagues will do the same. If they refuse, they will be declared weak-kneed, namby-pamby, quisling infidels and will be shamed on this blog (Though such idle threats rarely work these days; perhaps I could threaten them with a painful death, which seems to do the trick). If readers would like to show their solidarity, please email your Mohammad masterpieces to me here: mmoynihan at reason.com. The best ones will be published on Hit & Run, which, along with the concomitant death threat, is reward enough. 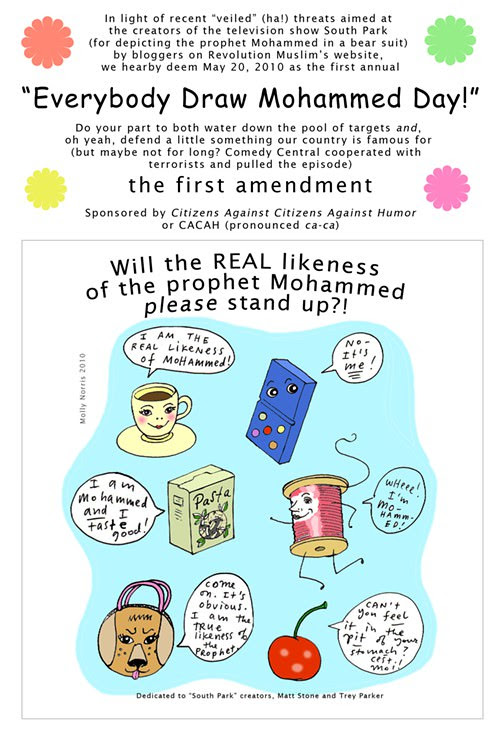 I'm in on this too. Monstrously fun.

Art. 78.It is forbidden to conceal the face disguise, make-up wearing masks on the public road or in places accessible to the public except:

2 ° the participants in an authorized historic, folkloric or camavalparade.

Except for a special autorisation is the wearing off a mask prohibited."
So my guess is that there's not enough political will to enforce it.

Likely, it is one of those old laws that they don't enforce in any case anymore.